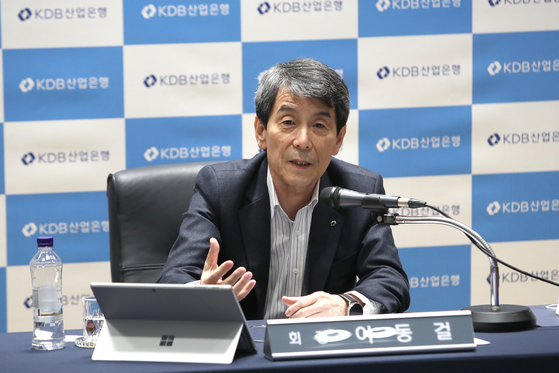 
Korea Development Bank (KDB) Chairman Lee Dong-gull said the bank will not spend a penny on troubled automaker SsangYong Motor unless it is able to find a new owner and come up with a viable plan to normalize business operations.

“It is the last chance for SssangYong Motor. If the automaker misses this chance, that will be the end of this company,” Lee said during an online press briefing held Tuesday.

The beleaguered automaker is currently in negotiation with a potential buyer together with its owner Mahindra & Mahindra to raise funds after delaying the court receivership process through a so-called autonomous restructuring support (ARS) program.

The court’s decision on receivership has been delayed until Feb. 28 to give the automaker time to persuade creditors and investors.

Lee said details on what’s being discussed and who the potential buyer is cannot be revealed now as the announcement can influence ongoing talks, but said even if the talks go well and the automaker succeeds in finding a new owner, KDB will only give support if the SsangYong Motor labor union vows not to take industrial action until the company is in the black and to hold wage negotiations every three years rather than every year.

“On top of these conditions, the automaker will have to offer us a viable plan that will save the company,” Lee said. “If the plan seems to be lacking, we will decline to help.”

Lee made it clear that if the negotiation fails or if SsangYong Motor fails to normalize its business even after finding a new owner, there will be no help available.

“A company cannot be restored just by money,” the chief of the state-run bank said. “KDB will make decisions based on its principle to make the best outcome with minimal input.”

On the merger process of Korean Air Lines and Asiana Airlines, Lee said the process has been going well without much trouble.

On potential difficulties in earning approval from global antitrust regulators, Lee said he believes the process will not face many problems considering both airlines would make up only about the 10th largest airline in the world even after they are combined and massive merger deals have already taken place in other countries like the United States.

According to Lee, the airlines will be sending applications to combine the business to antitrust regulators in 16 countries including Korea, China, Japan, Turkey and the United States.