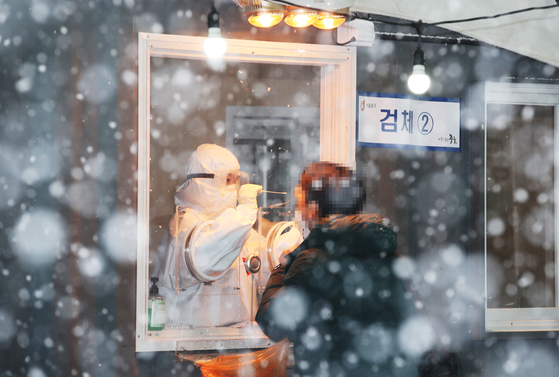 A man gets tested for the coronavirus Tuesday at Seoul Station Square amid heavy snow. [YONHAP]

Police officers in Sangju, North Gyeongsang, said Tuesday they filed pretrial detention warrants for two people connected with a Protestant missionary school on charges that they didn’t cooperate with government orders for a list of recent visitors, accusing them of causing a Covid-19 cluster to grow out of control.

At least 576 Covid-19 infections have been traced to the BTJ School in Sangju, about 170 kilometers (106 miles) south of Seoul, as of Monday at midnight, according to data released by the Korea Disease Control and Prevention Agency (KDCA).

There were 505 cases linked to the cluster as of Saturday.

Sangju police said two people at the missionary school allegedly failed to quickly submit a list of some 500 people who attended a big event on Nov. 27 and 28. Health officials had asked for the list as they were scrambling to track down visitors to the BTJ School to stem a growing cluster.

The BTJ School eventually handed over the list on Dec. 17, but by then, many people in the Seoul metropolitan area — Seoul, Incheon and Gyeonggi — as well as in Daejeon had been diagnosed with the coronavirus in connection with the Sangju missionary school, police said.

A local court is expected to decide whether to detain the two suspects in the coming days.

The KDCA said an estimated figure of 2,797 people are believed to have visited the BTJ School from Nov. 27 to Dec. 27, when the virus is suspected to have spread among visitors who came for missionary training.

Of those visitors, 126 people have tested positive for Covid-19 so far, of whom 53 people infected 450 others at 27 different houses of worship and social gatherings in nine major cities and provinces, including Incheon, Busan, Daejeon, Gwangju, Gyeonggi and Gangwon.

Health authorities fear this is just the tip of the iceberg, given that 67 percent of recent visitors to the BTJ School, or 1,873 people, haven’t been tested for the virus at all. 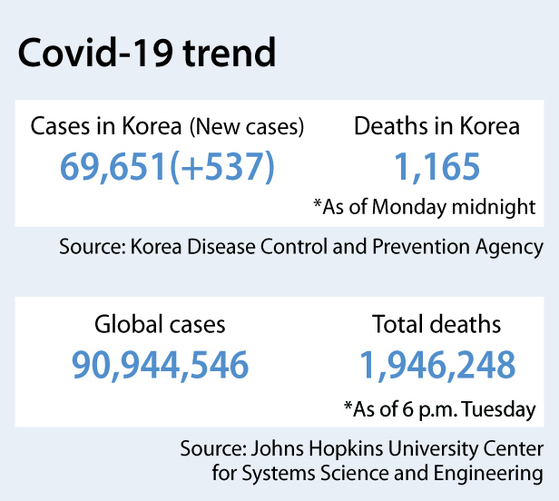 “We’re strongly encouraging local government offices to individually call them and get them tested, but a lot of them aren’t picking up their phones,” said Lee Sang-won, an official at the Central Disease Control Headquarters, adding, “Some phone numbers are just wrong.”

Lee continued, “Many people who attended the gatherings had their phones turned off, so epidemiologists are having a difficult time with contact tracing. The uncooperative attitude of the BTJ School could cause a significant amount of damage to society.”

The BTJ School was founded in 2014 by InterCP International, a Korea-based organization that runs missionary schools and missionary training programs. Exactly where these programs are held isn’t explained on the group’s official website, but a description of the BTJ School says that it offers lessons on evangelism and discipleship, “church planting” and training in “relationship and healing.”

BTJ stands for “back to Jerusalem.”

Local government offices, for their part, warned BTJ School visitors this week that if they don’t show up for testing, they could face legal charges.

How the virus got into the Sangju training facility is unknown, but the first Covid-19 case was detected on Dec. 3. The Sangju city government forced the facility to shut down last Thursday as the cluster began to grow at an alarming rate.

Meanwhile, among 537 people who were diagnosed with the coronavirus nationwide Monday, 508 were due to domestic transmission.

Twenty-five patients died Monday, raising total deaths to 1,165, while 1,017 patients recovered, bringing total recoveries to 53,569. As of Monday at midnight, Korea had counted 69,651 Covid-19 patients in all.