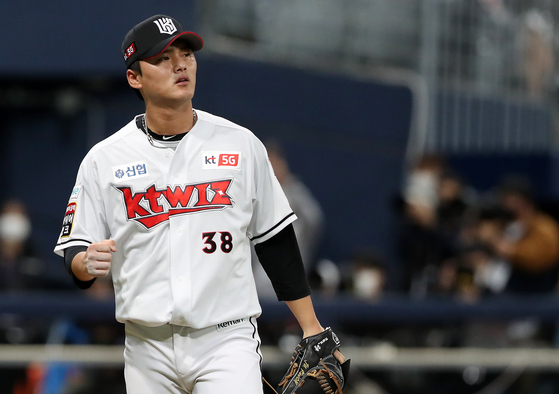 
During the 2020 KBO season, KT Wiz reliever Ju Kwon never once allowed more than two earned runs in any of his league-leading 77 games. In those outings, Ju gave up more than two hits just once.

The 25-year-old is about to find out if his own club will prove to be tougher than opposing batters he has faced.

On Monday evening, Ju became the first KBO player in nine years to file for salary arbitration, with all of 30 million won ($27,000) separating him and the Wiz. The league's panel of arbitrators must determine Ju's salary for 2021 by Jan. 25.

The two sides have until 6 p.m. next Monday to submit documents to the KBO to support their respective cases. If either the team or the player fails to do so, then the side that handed in documents will be declared the winner.

If both the Wiz and Ju don't submit their documents by the deadline, the KBO will assume that they have decided not to go to a hearing.

Only one player in 20 previous arbitration cases has emerged victorious.

In the KBO, players with at least three seasons of experience who aren't free agents can apply for an arbitration hearing if they and their team can't agree on the amount of the new contract.

One full season equates at least 145 days spent on the active roster. And until they hit free agency — after eight seasons for four-year university grads and nine seasons for high school grads — KBO players must keep signing one-year deals with their current teams. Ju, drafted out of high school before the 2015 season, completed his fifth full season in 2020.

On a 150-million-won salary, Ju led the KBO with 31 holds, and posted a 6-2 win-loss record along with a 2.70 ERA to help the Wiz reach the postseason for the first time in franchise history.

Relief pitchers earn holds for protecting the lead for the next reliever and recording at least one out after entering the game in a save situation — either with a lead of three or fewer runs, or with the tying run on deck, at the plate or on the bases.

The hold is an unofficial stat in Major League Baseball (MLB), though non-closer relievers rely on their hold totals during salary arbitration hearings. In the KBO, not only is it an official stat, but the leader for each season receives a trophy and prize money of 3 million won.

Ju will now have to prove those 31 holds and his second straight sub-3.00 ERA season are worth the raise of 100 million won. The Wiz must argue that Ju isn't worth quite as much because he mostly got lucky in 2020 — and do so without hurting the right-hander's feelings.

Once the ruling comes down, Ju and the Wiz must sign that contract within 10 days. If Ju refuses to sign, he will be placed on the voluntarily retired list and will require the KBO's permission to be activated.

But if the Wiz decline to sign Ju to the salary determined by the panel, Ju will immediately become a free agent. And the Wiz then must pay Ju 10 percent of that amount from February to May until the pitcher signs with a new club.

Previously, 97 players had filed for arbitration but only 20 ended up going to hearings, with the 77 others settling before going to the panel.

Current LG Twins manager Ryu Ji-hyun remains the only winner. Before the 2002 season, the Twins sought to cut Ryu's pay from 200 million won to 190 million won. The 1994 Rookie of the Year demanded 220 million won and got his wish.

On the other hand, some MVPs and All-Star caliber players have had to bite the bullet. The most recent loss came 10 years ago and it also might have been the most famous case.

Lotte Giants slugger Lee Dae-ho was voted the MVP in 2010 after a dominant offensive campaign. He captured the batting Triple Crown as the leader in batting average, home runs and RBIs and also topped the KBO in hits, runs scored, on-base percentage and slugging percentage. Lee made 390 million won that year.

For 2011, the Giants offered Lee 630 million won for the largest year-to-year salary increase in club history. But Lee, who wasn't yet a free agent, demanded 700 million won. The arbitration panel sided with the Giants. Lee became a free agent after 2011 and spent the next five seasons in Japan and MLB.