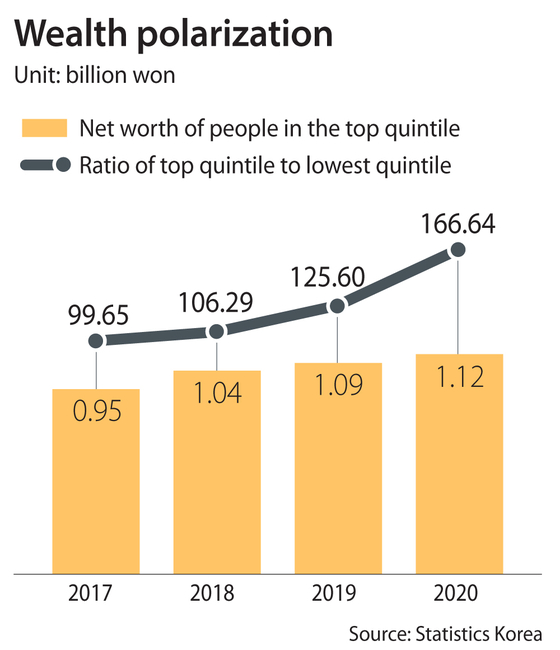 A 37-year-old man, a resident of Ilsan, Gyeonggi, often feels ashamed when comparing himself with one of his colleagues. The two have similar backgrounds, but the man is currently living in a jeonse, or long-term lease, apartment while his friend owns his own.

He and his friend were raised in middle-class families. After graduating university in Seoul, they both entered one of the largest companies in Korea. But the two paths diverged when they got married about five years ago.

Just like other newlyweds in Korea, the man lives in a jeonse apartment. But his friend borrowed money from the bank and received financial support from parents and purchased an apartment, and property prices have been skyrocketing since then.

“My friend earned hundreds of millions of won just because he jumped into the real estate market earlier than me,” the man said. “The wealth gap between me and him has widened due to the surge in real estate prices.”

Net worth is the value of all assets minus the total of all liabilities.

Assets of people in the top 20 percent are largely real estate. Of assets they own — which on average are worth about 1.31 billion won — roughly 77.1 percent, or 1.01 billion won, is in a form of property, while only 19.4 percent is financial assets.

The report also showed wealthier people are likely to own more real estate than poorer people, according to the data.

The rate of growth in the prices of Seoul apartments during the three years of the Moon administration is about 4.5 times faster than the rate changed during the nine years under former presidents Lee Myung-bak and Park Geun-hye, according to Citizens’ Coalition for Economic Justice.

Based on data by KB Financial Group Research Institute, it takes about 12.9 years for a middle-class household to buy a middle-priced property in Seoul in 2019. But as of September 2020, it takes about 15.6 years.

“The 24 sets of real estate measures ended up widening the wealth gap between homeowners and people who do not own properties and causing wealth polarization between [people] in greater Seoul areas and provinces,” United Future Party lawmaker Yoo Gyeong-joon, former head of Statistics Korea, said. “The wealth polarization in Korea was not that serious compared to other Organisation for Economic Cooperation and Development [OECD] countries, but the Moon administration worsened it.”

The rally in the stock market was also a driving force.

As the benchmark Kospi broke 3000, people who owned stocks made big paper gains, while those have not invested in the stock market were left stuck in place.

Critics are raising concerns over the overheated markets, saying they might cause depression and social deprivation.

More Koreans who don't currently own any real estate are suffering from the so-called real estate blues — feeling depression amid the soaring prices of properties.

In November, a 37-year-old man living in a jeonse apartment in Mok-dong, western Seoul, killed his 38-year-old wife after having a quarrel about missing a chance to purchase a property. Then the man threw himself out of the apartment.

Many Koreans who have been working hard at their positions — while not investing in the stock market — are suffering from a fear of missing out (FOMO).

A 46-year-old who has been working at middle-sized company for nearly 20 years said he had never tried stock investment. He said he was traumatized when his father lost his fortune in the stock market.

But these days he’s feeling left out.

“Many of my friends who took out loans and invested all in stocks and bitcoin earned so much money in just a few days, and that is more than my monthly salary,” the man said. “I feel left out as I think I’m the only one who couldn’t earn money through the bullish stock market.”

Park Young-bum, an economics professor at Hansung University, agrees with the seriousness of the current situation and warns about the future.

“If the current situation continues in which the price of assets increases at much faster rate than people’s salaries, the value of income will be decreased,” Park said. “The polarization and inequality will intensify further, and this will eventually widen the gap between real economy and asset market.”

“The government must come up with new policies that can lead the more-than-enough liquidity in the market to an increase in people's salaries instead of the asset prices.”