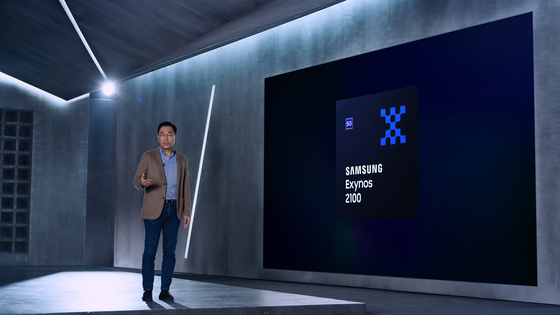 Kang In-yup, president of the System LSI Business at Samsung Electronics, delivers a speech during CES 2021 on Tuesday. [SAMSUNG ELECTRONICS]

The newest chipset, based on 5-nanometer extreme ultraviolet (EUV) processes, is designed for 5G-enabled premium smartphone products — possibly including the Samsung Galaxy S21 — as it is fitted with a 5G modem.

The Exynos 2100 follows the Exynos 1080, announced back in November, which is Samsung’s first 5-nanometer mobile processor tailored for mid-range smartphones.

But the big question is how it differs from the Snapdragon 888, the newest mobile processor manufactured by Qualcomm.

Both solutions come with similar CPU arrangements developed by Cambridge, Britain-based ARM with Samsung having a slightly higher clock rate.

As for image processing, Samsung packs in an image signal processor (ISP) that supports camera resolutions of up to 200 megapixels.

The processor can connect up to six individual sensors and is able to process four simultaneously.

The Snapdragon 888 features a comparable image processor, but it can only process three sensors concurrently.

Still, the headline numbers will have to be put to the test when it is released, presumably in the first half of this year.

Samsung stuck a confident note that its latest chipset will deliver on its promises.

“Today we are delighted to introduce the Exynos 2100, our most advanced mobile processor yet," said Kang In-yup, president of the System LSI Business at Samsung Electronics. "Armed with powerful processing technologies and an advanced 5G modem on a power-efficient 5-nanometer process node, Exynos 2100 will set a new standard for tomorrow’s flagship mobile devices."