Virtual graduations are the only option this year

Virtual graduations are the only option this year 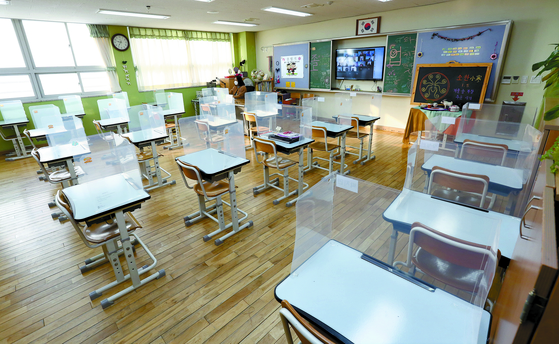 The faces of 99 sixth graders from Wonhyo Elementary School in Yongsan District, central Seoul, were visible in small boxes on a group call on Webex on Wednesday. They were moving up to middle school.

At the same hour, Anyang Girls’ Commercial High School opened a live streaming session on YouTube for their graduation ceremony.

“I’ll miss you all!” wrote one student in the live chat box.

“Thank you teachers, we made it all the way thanks to you!” wrote another.

In Korea, graduation ceremonies for elementary, middle and high schools takes place around this time, as the new academic year begins in March.

School grounds are supposed to be packed with students on the big day, with vendors selling flowers at the gates. After attending their graduation ceremonies and receiving their diplomas and yearbooks, the students roam in groups from classroom to classroom, hugging and crying, taking photos. No one wants to leave.

That tradition seems like something from a distant past in the midst of the Covid-19 pandemic.

Oh Sang-ah, a teacher at Siheung High School in Gyeonggi, manned her classroom all alone on Jan. 7 as a graduation ceremony unfolded on her laptop screen.

“Most of my classes were done virtually in the past year, and even when we were able to meet in small groups in schools, we were all wearing masks,” Oh said. “I have just graduated a class of students but it just isn’t coming home to me.”

Most schools are sending students their diplomas by mail.

“It’s not the end of the world,” said Jung Han-ju, principal of Wonhyo Elementary School. “The ceremony was done online but that allowed us to see more reactions from the individual students who chatted away nonstop in the chat box.”

“Graduation is supposed to be done together, with my friends all packed together in hallways and auditorium at the school,” Hyun said. “I called my friends after the ceremony online and had cake with my family, but it’s just not the same.”

Korea, home to 70,212 Covid-19 infections as of Tuesday, has limited classes in elementary, middle and high schools to a third of their usual size as daily cases spiked in December. Most schools are in winter break until late February.

BTS to join Obamas, others, in virtual graduation ceremony