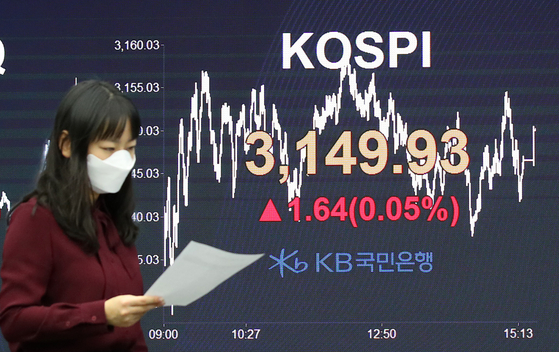 The closing figure for the Kospi is displayed in a dealing room at KB Kookmin Bank in Yeouido, western Seoul, on Thursday. [YONHAP]


Korean stocks closed nearly flat Thursday as investors cashed in on gains from large-cap chip and auto stocks. The won fell against the dollar.

The main index traded choppy throughout the session, swinging between positive and negative terrain, as investors offloaded major chip and auto stocks.

The Kospi refreshed record highs last week on the back of stellar rises in top cap Samsung Electronics and Hyundai Motor.

U.S. President-elect Joe Biden is expected to unveil his plan to prop up the world's largest economy before taking office.

The local currency closed at 1,098.0 won against the dollar, up 2.9 won from the previous session's close.