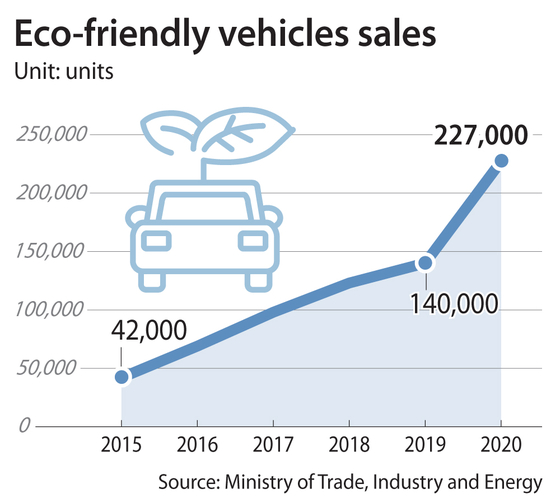 Despite the coronavirus pandemic, Korea's automotive industry performed quite well in terms of production last year, moving Korea up to the fifth-largest car manufacturing country.

According to the Ministry of Trade, Industry and Energy on Thursday, Korean automotive companies manufactured some 3.51 million vehicles in 2020, an 11.2 percent drop from the previous year. But compared to other countries, it performed quite well — the United States saw a 20.8 percent drop, Japan saw a 17.5 percent drop and Germany saw a 28.2 percent drop.

That makes Korea the fifth largest car manufacturing country in the world in 2020, behind China, the United States, Japan and Germany. Korea ranked seventh in 2018 and 2019.

“With Korean automakers’ introduction of new cars and the government’s policies to boost domestic sales, sales met a record high last year,” said Lee Min-woo, an official from the Automobile and Aerospace Division of the Ministry of Trade, Industry and Energy.

Sales of electric vehicles (EVs), hybrids and hydrogen-fueled vehicles posted 227,000 last year, a 58.7 percent increase on year. That accounts for 12 percent of total car sales in the domestic market and it is the first time it exceeds the 10 percent mark.

EVs were particularly popular. Exports of EVs increased 60.1 percent on year, the largest growth among all eco-friendly vehicles.

“[The popularity of environmentally friendly vehicles] was largely led by Hyundai Motor and Kia Motors, which have been gearing up to develop eco-friendly vehicles,” said Kim Pil-soo, an automotive engineering professor at Daelim University College, who also serves as chair of the Korea Electric Vehicle Association.