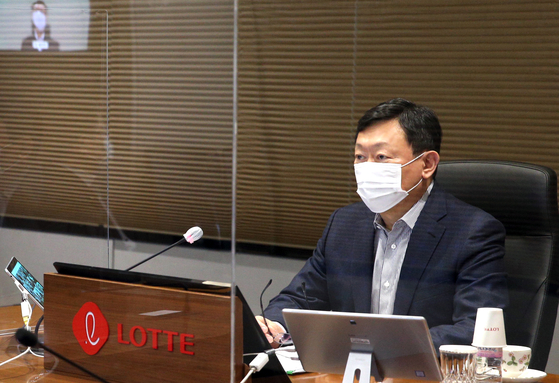 
Lotte Group Chairman Shin Dong-bin said group companies performed poorly last year during the pandemic and told employees of the companies to prepare for the post-pandemic era, which he expects will arrive after the second quarter.


In a biannual Value Creation Management meeting, held to discuss the group’s purpose and strategies, Shin threw questions to Lotte company employees, asking about the core value and fundamental competitiveness of each Lotte company.

The four-hour virtual meeting took place on Wednesday. It was attended by 130 employees, including CEOs of Lotte companies.

“Due to Covid-19, the performance was worse than at any other time,” Shin said during the meeting. “It is proof that our potential is not being recognized in the market. Just like companies that innovate in times of crisis show major growth, [Lotte group companies] have to prepare for the time when the pandemic starts to ease after the second quarter this year.”

He told the Lotte company presidents that they should be able to state clearly the company's path over the next five to 10 years.

The Lotte group “can only succeed if each company has a clear vision,” Shin added.

Shin said companies that can’t transform innovatively should be reviewed, while highlighting the importance of research and development for the pursuit of digital transformation.

He also mentioned transforming the top-down culture and the pursuit of environmental, social and governance values.

Shin has been highlighting a sense of crisis to Lotte group company employees.

On Jan. 4, Shin told Lotte group company employees to ask themselves whether “core capacities were fully demonstrated in the unprecedented situation.”