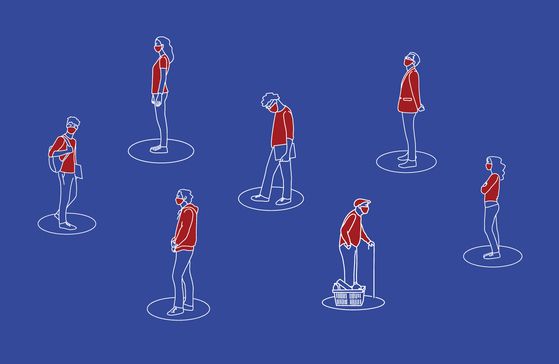 Nineteen-year-old Moon Seok-young retook her College Scholastic Ability Test (CSAT) last December. Usually during this time of the year, she would be busy enjoying her freedom along with other students after wrapping up one of the most important tests they'll ever take. But going to cafes, cinemas, dining out at trendy restaurants and looking for part-time jobs are activities of the past for students biding their time before becoming college freshmen.

Ever since she began preparing to take the CSAT again last year, Moon has not ventured out for a meal. And even when the test was over, she didn't get to celebrate the accomplishment with her friends. Her daily routine consists of taking a brief walk outside to stretch her legs or inviting her close friends over to her home.

“I’m even cautious to contact my friends because I know I’m not going to see them anyway,” Moon said. “And it’s not because I’m an introvert — I love going outside and hanging out with my friends, but I haven’t been able to do that all year.”

Moon hopes that for the sake of everyone’s health and safety that they all stay in their homes until this pandemic blows over.

“I just wish people would stop seeing each other at all, at least until the daily cases subside,” Moon said.

Another 19-year-old, Kim Se-jung, has a different opinion and thinks it’s okay for people to host small gatherings —though of course abiding by the current Level 2.5 social distancing level which forbids more than four people coming together — in private spaces.

“I usually meet my friends online now or through Zoom,” Kim said. “Of course people should not be out in heavily populated areas or streets, but I figure it’s okay if the scale of the gatherings is small.”

It’s been almost a year since the world started to battle the coronavirus pandemic and people have learned the hard way just how precious social interactions are. Ever since the government officially banned social gatherings of more than four people last month, a battle has been waging on social media over how often people should host such gatherings, or if people should even be meeting at all.

Jeong Yu-na, 26, is fighting that battle with her family. Even though it’s been months since she had a proper meal with her friends, her parents want her to refrain from activities outside of their home altogether.

“I do meet small circles of friends sometimes, but I know that it’s nothing to be proud,” Jeong said. “I do think that it’s all right to go out for simple meals or see my friends in their homes, but my parents want me to cut off all outdoor gatherings. I don’t think there’s a straightforward answer as to what kind of gatherings can be deemed as ‘proper,’ and I know that we should refrain from going out unless absolutely necessary, I guess. But it’s hard.”

Her mother, Kwon Jin-hee, 51, worries for her daughter whenever she ventures outside.

“No matter what kind of guidelines we set up, I believe that a gathering itself becomes the cause of infection,” Kwon said. “[In order to prevent infections from spreading] the responsibility falls upon each individual and what measures they take. To discuss the scale of these gatherings, therefore, is meaningless. I know that family members need to go outside for social activities, but I can’t help but worry when they go out, and I guess our family is no exception to escalating familial conflicts as parents pressure our children to come home early.”

Psychology Prof. Lim Myung-ho of Dankook University perceives that cultural context also plays a factor in the rise of domestic conflicts, citing a survey conducted in China on 1,210 respondents from 194 cities from Jan. 31 to Feb. 2 last year from a research thesis titled “Immediate Psychological Responses and Associated Factors during the Initial Stage of the 2019 Coronavirus Disease Epidemic among the General Population in China.”

“Approximately 75 percent of the respondents who spent the majority of their time at home said they were most stressed about their family members contracting the virus,” Lim said. “I believe this is rooted in the eastern culture in which people prioritize their family over everyone else. Their worries may manifest so that they lash out at other family members and may be the reason why people tend to restrict their families' movements so strictly, even more so than their workplaces.”

Even though the government has refrained from enforcing the strictest Level 3 guidelines, people’s lives have been severely impacted.

Lee Da-kyoung, 35, works in one of the industries most devastated by the coronavirus. As a chef, she was forced to close her restaurant by 9 p.m. following social distancing guidelines under Level 2 and 2.5, turning the dynamic of her whole life upside down.

“We [chefs] used to go out for a drink after work—we would visit pojang macha [tent bar], wine bars and other famous restaurants,” Lee said. “But now, I can’t do any of those things. I wouldn’t know where and how I could become infected, so it’s difficult to go anywhere. I don’t even ring up my acquaintances asking how they’ve been or if we should meet up because I know that’s hard, so I don’t. It’s very stressful and depressing to not be able to do things I want, like working out and meeting people, but it’s also scary to go outside. I don’t know where people have been.”

Lee admitted that she hasn’t completely cut off contact with people, but she does avoid meeting her friends who post pictures of themselves out and about on social media.

“To be honest I don’t approve of people who go outside too often,” Lee said. “I know that as someone who’s running a business, I'm really grateful that they’re uploading posts recommending people to try certain places out, but when I think of it in terms of how they may be fueling the probability of spreading virus, it sort of deflates the purpose they’re trying to achieve. If it weren’t for the virus, I would definitely try visiting their recommendations, but now’s just not the right time.”

Once considered normal, posts on social media showing off new restaurants or any outside expeditions are now at the center of disputes among friends, families and followers. And the more followers, the bigger the backlash.

YouTuber Gook Gabie, who has some 1.3 million subscribers, is one representative case of sharing too much of her life online. She was subject to a flurry of criticism when she uploaded a YouTube video of herself celebrating her birthday with other friends and her husband in her residence while she was supposed to be in a two-week quarantine after she came to Korea from Britain in October.

She deleted the problematic video and apologized, but the backlash continued. As the controversy grew more heated, Mapo District’s Public Health Center asked the police to investigate whether or not her actions violated the country’s quarantine law, and police last month recommended prosecutors to indict the YouTuber.

While some say the reprimand was too severe, others point out that it was a proper measure taken to prevent the spread of the virus.

Earlier this year on Jan. 5, singer Lee Seung-cheol was criticized when he uploaded pictures of himself on his Instagram story at a ski resort — donned in red skiwear and goggles — seemingly receiving a lesson with some friends.

Many netizens criticized that his posts weren’t proper during difficult times. “As a public figure he should have been more careful,” reads a comment from an online community. “If you're not going to encourage people to stay at home at least don't post a snapshot from a ski resort,” reads another comment.

Lee’s visit to the ski report did not violate quarantine laws. As of Jan. 4, outdoor winter sports facilities, including ski resorts and sledding parks, which had been closed, reopened under restrictions. They can only allow one-third of their full capacity at a time and must be closed every day from 9 p.m. to 5 a.m.

Nate Lee, a 25-year-old Korean who’s been living in the United States for 10 years, believes that the local waves of criticism directed at public figures derives from Korean portal sites' comment system.

“In Korea, the press is free,” he said. “We have this main Internet platform Naver and we are able to [instantly] see and get recommendations of all the news that’s going on there, which is why I think the attention focuses immediately on them [public figures] when their social media activities are reported on the Internet.

“But here [the United States], what newspapers people read differs depending on their income,” Lee continued. “Because people normally wouldn’t pay — let’s say 10,000 [$9] to 20,000 won per month — to read news articles. And even on free media platforms, people here definitely don’t write as many comments like in Korea. In some states, people [still] don’t even wear masks, let alone think about social distancing.”

Hanson Park, a neuroanthropologist and a lecturer in the department of anthropology of Seoul National University, understands the heightened sensitivity of local public sentiment.

“It’s been a year since the virus hit the world,” Park said. “That’s too long a time. What the government should have done is to lay out the rules short and strong, but it became too haphazard. Business owners were forced to shut down and they are suffering both economically and socially, but they witness others — like celebrities or public figures — enjoying themselves while disregarding the guidelines or even if they are not violating the laws, anyone can see that these people are having fun, and of course people feel angry and resentful. The results are not fair.”

Park places fault in the government’s lack of leadership, and forecasts that it will continue to affect the future of this pandemic.

“People can buckle down with not having enough, but what they won’t settle for is unfairness,” Lee said. “I predict that similar kinds of problems will continue to arise, but since people have already accumulated negative social experience, they won’t follow the procedures. Let’s say another kind of disease is spreading in a specific part of an area and it could be contained if it goes into a lockdown and people follow the protocols. Nobody will follow the rules because they’ve already experienced that they’re the only ones who will pay for the damage. Virus complications are already spreading, and there’s a possibility that such negative circumstances will continue to arise next year and the year after.”