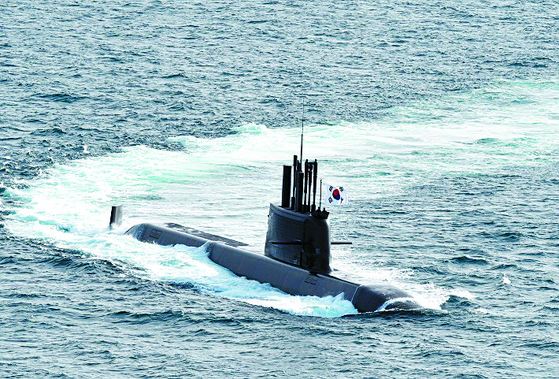 
An arms race in missiles is heating up on the Korean Peninsula with South Korea developing its own submarine-launched ballistic missile (SLBM) to match North Korea’s.

According to a military source on Wednesday, Seoul concluded ejection tests on land of its Hyunmoo-2B missile last year and is planning to hold underwater tests this year.

Once the tests are concluded, the 500-kilometer (311 miles) range missile will be deployed on a 3,000-ton or larger submarine.

Underwater ejection tests could be conducted on a test barge used for such occasions, but it could also be done from a 3,000-ton Dosan Ahn Changho-class submarine.

That submarine has six vertical launch cells capable of firing SLBMS using a cold launch system, in which the missile is fired using a gas generator. Such systems are used for most modern intercontinental ballistic missiles and SLBMs.

South Korea’s Ministry of National Defense said it could not confirm information about the missile’s specifications or the testing process.

The Hyunmoo-2B, fully deployed in 2015 as a surface-to-surface missile, is a short- to medium-range ballistic missile believed to be derived from the Russian-made Iskander missile.

Its conversion into an SLBM is notable given that a missile tested by North Korea in a series of high-profile launches in 2019 resembled the Iskander. Named KN-23 by the U.S. Department of Defense, the missile is believed to have a similar range to the Hyunmoo-2B at around 450 to 700 meters (1,476 to 2,297 feet).

North Korean leader Kim Jong-un formally announced at this month’s Workers’ Party Congress that work on a nuclear-powered submarine and underwater-launched strategic missile was ongoing, weapons which he said would serve as key instruments of Pyongyang’s deterrence policy.

In a military parade last October, the regime revealed a stout missile labeled the Pukkuksong-4A, believed to be a new SLBM it claimed it successfully test-fired in 2019. 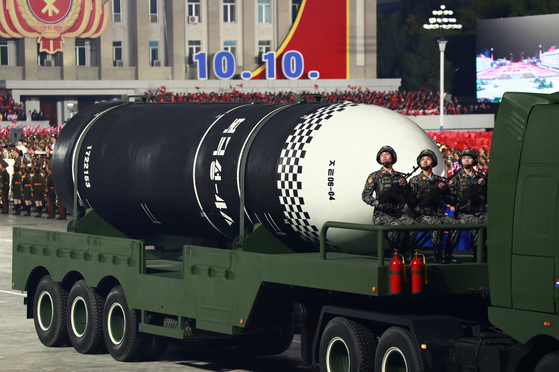 A new submarine-launched ballistic missile (SLBM), the Pukkuksong-4A, unveiled by North Korea in its parade in October. [NEWS1]


This, along with a 3,000-ton submarine the North unveiled in a state media photograph in July 2019, appeared to confirm the regime’s continued efforts to develop a capacity to strike the continental United States through a ballistic missile submarine.

While far more discreet than Pyongyang, Seoul too has been rapidly augmenting its ballistic missile and submarine capacities.

Along with successfully getting the United States in July to eliminate restrictions on its use of solid propellants, thus greenlighting its ability to build long-range missiles, South Korea recently undertook tests of its new Hyunmoo-4 ballistic missiles, capable of hitting any target within North Korea at a maximum distance of 800 kilometers.

The third phase of the program aims to introduce nine domestically built submarines to the Navy by 2029.

Other than its astronomical costs, another obstacle to such a plan stems from the United States. Incoming President Joe Biden could revert to the Obama administration’s strong non-proliferation stance, blocking allies like South Korea from further harnessing its nuclear capabilities.