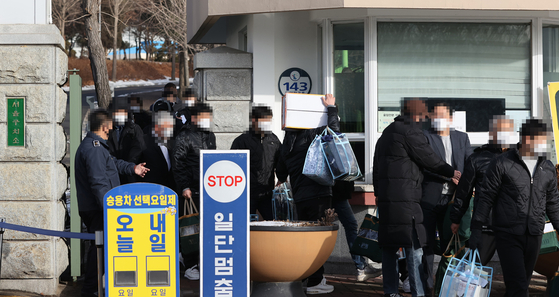 Prisoners are released on parole from the Seoul Detention Center in Uiwang, Gyeonggi, on Thursday, earlier than scheduled in a pre-emptive attempt to prevent infections of Covid-19 among inmates. [YONHAP]

A so-called second basic plan for mental health and welfare was discussed in a meeting presided over by Prime Minister Chung Sye-kyun, in which authorities agreed to establish four around-the-clock emergency mental health centers across the nation this year, and build 10 more by 2025.

The centers will chiefly be responsible for treating people with risks of physically hurting themselves or others due to a mental disorder, the Ministry of Health and Welfare said.

According to the five-year plan, the government will also offer mental health services to teens, given that many people develop psychological disorders during adolescence. The services will be offered to children whose results on a mandatory mental test taken in their first, fourth, seventh and 10th grade years show they need help. 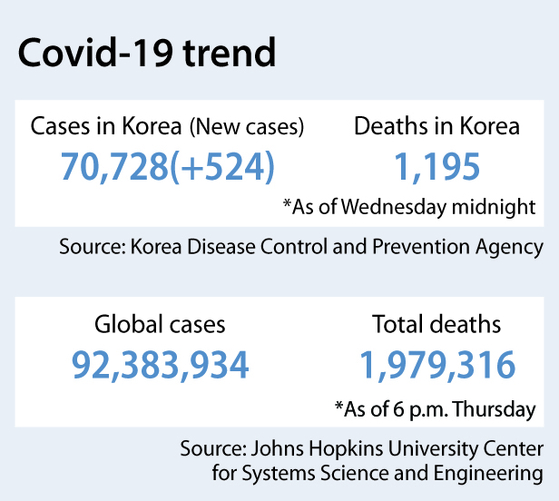 “Usually about a quarter of students whose test results show the need for help don’t receive assistance due to their parents’ refusal,” said Jo Myeong-hyeon, head of student health policy at the Ministry of Education. “For those children, [health care] experts will visit their schools, meet the students and their teachers or parents, and make sure they get the treatment they need. It will be extremely helpful” to the kids.

Under the five-year plan, the government will expand financial assistance to patients who were previously hospitalized for a mental disorder so that even after they’re discharged, they can receive outpatient services without worrying about the bill.

More rehab centers for patients with psychological illnesses will be built as well, bringing the current 348 centers to 548 by 2025.

Suicide prevention centers affiliated with local government offices currently have three employees on average. The central government said it would hire more workers to raise the average to four this year and five by 2025.

The number of workers at the Ministry of Health and Welfare’s suicide prevention hotline will also be raised to 57 this year from the current 26. 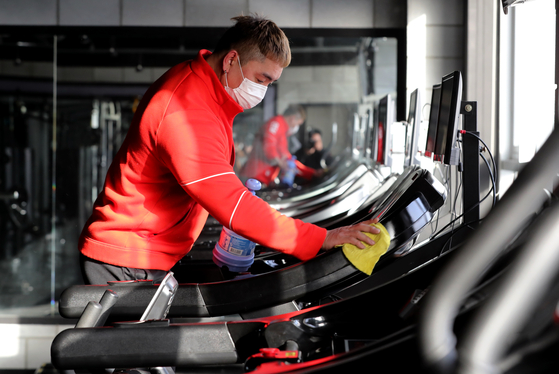 Kim Jang-hwan, owner of Synergy Gym in Incheon, cleans a treadmill on Thursday as he prepares for resuming business if health authorities lift restrictions. [NEWS1]


“By 2025, our budget for mental health will reach about 3.5 percent of the entire health budget,” said Yeom Min-seob, chief of mental health policy at the Ministry of Health and Welfare. “After 2025, we will hopefully raise the ratio to 5 percent, as recommended by the World Health Organization.”

The measures will help the country deal with the coronavirus blues, Yeom stressed.

In a survey conducted by the Korean Society of Traumatic Stress Studies, 13.8 percent of the nation said last year they experienced suicidal thoughts, nearly three times more than in 2018. The number of people at high risk of depression rose from 3.8 percent in 2018 to 22.1 percent last year, nearly six fold, the same study indicated.

The Health Ministry cited the study as proof that the pandemic was taking a toll on Koreans’ mental stability, and promised to set psychological care at the forefront of policy decisions.

Of Wednesday’s infections, 496 were due to domestic transmission.

There were 162 infections detected in Gyeonggi, 131 in Seoul, 40 in Busan, 30 in Gwangju, 24 in Incheon, 18 in North Chungcheong, 16 each in North Gyeongsang and South Gyeongsang, 12 in South Chungcheong, 11 each in Daegu and Gangwon, nine in Ulsan, six in South Jeolla, three each in Daejeon and North Jeolla as well as two each in Sejong City and on Jeju Island.

The remaining 28 cases were imported — seven from the United States, five from Indonesia, three from Tunisia, two from Japan and one each from Russia, Myanmar, Iraq, Pakistan, Kuwait, Hungary, Brazil, Uganda, Egypt, Tanzania and Malawi.

Ten patients died Wednesday, raising total deaths to 1,195, while 1,136 patients recovered, bringing total recoveries to 55,772. As of Wednesday at midnight, Korea had counted 70,728 coronavirus patients in all.

A worker build large snowmen in a park at Mount Naejang in Jeongeup, North Jeolla, Thursday. The Jeongeup city government said it hopes to send a message of hope to the nation fighting the coronavirus. [YONHAP]


As of Wednesday at 6 p.m., a cluster at the BTJ School, a Protestant missionary school in Sangju, North Gyeongsang, grew to 713 Covid-19 infections, 51 more than on Tuesday at midnight. Testing is still ongoing. The KDCA said Thursday that 1,330 people who recently visited the BTJ School haven’t been tested yet, which accounts for about 44 percent of some 3,000 visitors.

As health authorities continue to discuss whether to make changes to the current social distancing levels, officials said Thursday that the levels will likely remain in place next week, including the ban on all social gatherings of five people or more.

But local businesses that have been forced to shut down, such as indoor fitness centers, will probably be allowed to reopen under strict sanitation guidelines.