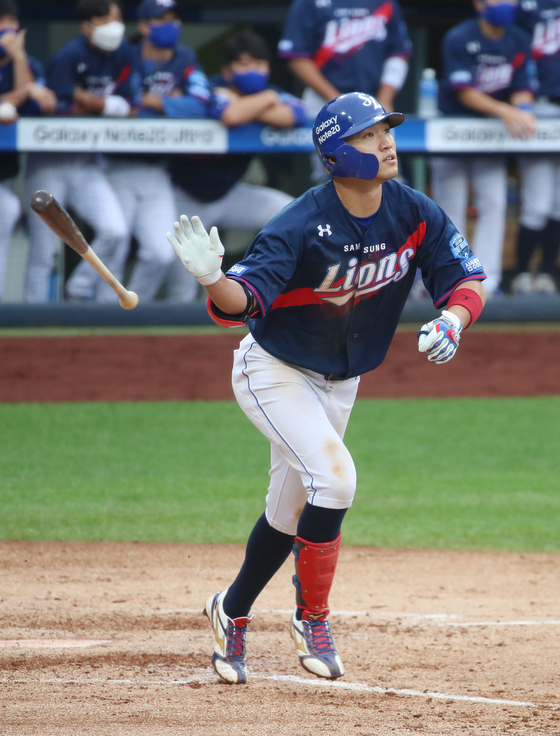 After making a comeback in the 2020 season, Park Hae-min of the Samsung Lions hopes to recliam the base-stealing title once again this year. [YONHAP]


For Park Hae-min of the Samsung Lions, 2019 was a nightmare.

Park, normally considered one of the fastest runners in the KBO, lost his base-stealing title that year, ending a four-year streak after he finished the season with only 24 stolen bases. He also ended the year with a disappointing 0.239 batting average after appearing in all 144 games.

Park's reputation as a solid offensive player took a hit that season. His pay was cut at the end of the year and he started 2020 looking like a strong defensive player who had lost his edge at bat.


Park struggled at the beginning of the season and was briefly sent down to the Future’s League, but when he returned he was regularly assigned as the Lions’ leadoff batter. Park fiercely competed for the base-stealing title until the very end of the season, finishing just one steal short of winner Shim Woo-jun of the KT Wiz.

Below are edited excerpts of an interview with Park.

A. It was disappointing because our team didn’t play very well, but personally I gained a lot. I’ve found a routine.


Q. What is your routine?

A. Before home games, I used to only take part in the team training, but after spending time in the Future’s League I’ve learned to spend another hour of batting practice. This routine helped me improve. Normally at bat I would be inconsistent, but a lot of that is gone. I started to think that if I play badly today, then I can get things together and do better the next day. This allowed me to improve my stability.

A. Because I suddenly had this image of being weak at bat, a lot of people around me tried to help. When I look back, I was changing my mind in response to every piece of advice. I was grateful for their help, but when I thought about it, I didn’t really have anything that I could call my own. They would tell me to do this and that, but now I’m able to focus on what actually works for me.


Q. Last season you didn’t get off to the best start. What happened?

A. I felt really sorry for [batting coach] Kim Yong-dal. During spring training, he held personal sessions with me on rest days. He invested a lot [in me], but I didn’t see results.


Q. When you returned for the Lions’ game against the SK Wyverns on June 5, you had three hits. Was that game a turning point for you?

A. I was batting well in the Futures League with a 0.364 batting average throughout nine games. The areas I fixed with [Futures League batting coach] Kim Jong-hoon allowed me to earn confidence in myself.


Q. Did you change your batting form?

A. I changed it into a form that allowed me to hit more comfortably. Coach Kim Jong-hoon suggested I needed to be more comfortable with my lower body. Rather than only using my hands, he told me to focus on my lower body. Once I learned to use my lower body well, my hands would follow. As I had three hits in my first game, I had this certainty in myself.


Q. You’ve appeared in 488 games in a row, and that streak ended last year. How did you feel about that?

A. At first, I was disappointed. It was a record I had some pride in. But [our catcher Kang] Min-ho told me once that if my continuous game appearance streak ends, that won’t be a big deal, so I don’t have to be obsessed with it. I was disappointed [to end that streak] when I headed down to the Futures League, but it ended up being a turning point. Later, I realized what Min-ho meant.


Q. You missed out on the league’s base-stealing title. Were you disappointed?

A. When my four-year base-stealing streak ended in 2019, I let go of that ambition. When I was in the Futures League, coach [Eiji] Ochiai once pointed out that my uniform was clean. Since then, I started to think what I can do well at. That’s when I wanted to climb up the base-stealing table once again.

The current record for the most base-stealing titles is held by Kim Il-kwon, at five, and I want to beat that record. Whenever I had a chance, I just got aggressive and started running. I did have a little regret in not winning the base-stealing title, but it’s alright, because I earned more at bat.


Q. Is your goal in 2021 to win the base-stealing title for the fifth time in your career?

A. I want to challenge myself to do it. But in baseball, you can’t get greedy. Once I start playing the baseball I can do, and I get my uniform dirty, then I believe the base-stealing title will follow.


Q. For the first time in your career you hit double-digit home runs last year. How did you feel?

A. As I got into my routine, I was swinging the bat with confidence. Before, I was thinking too much that I have to make hits so I got passive when I took a swing. As I got rid of that thought, I got to be more aggressive even if I was at zero hits in four at-bats.

A. It’s something I can’t imagine. I joined [the Lions] as a developing player in 2012. I thought only good baseball players earn their FA status. But now that I’m actually getting a chance [to become an FA,] it’s hard to believe. I have to rethink the path I thought I was on all this time.