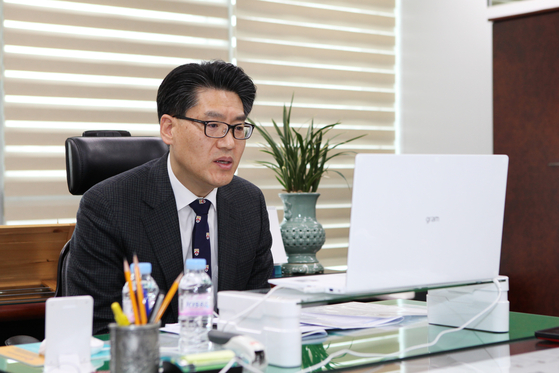 Kim Sang-do, deputy minister of aviation policy at the Ministry of Land, Infrastructure and Transport, speaks in an interview with the Korea JoongAng Daily in his office in Sejong City on Friday. [MOLIT]


For more than three decades, air traffic control in the skies south of Korea’s Jeju Island has been shared by three countries: Korea, China and Japan. That complexity, caused by accidents of diplomatic history, creates obvious safety issues.

The three countries have finally agreed to accept a proposal by a United Nations (UN) aviation agency to put an end to a complexity that is plainly an accident waiting to happen. The proposal includes Korea reclaiming traffic rights currently controlled by Japan in Korea’s airspace .

“Over the past 37 years, operation of the air traffic system over seas to south of Jeju Island has been abnormal,” admits Kim Sang-do, deputy minister of aviation policy at the Ministry of Land, Infrastructure and Transport. “Korea has been repeatedly asking for improvement to the system, but the issue only started to be recognized globally several years ago after the International Civil Aviation Organization [ICAO], a UN aviation agency, designated the area a 'hot spot.'”

Currently, there is a so-called air corridor stretching 515 kilometers (320 miles) from the Chinese ICAO designated-area called Akara on its eastern coast to Japan’s Fukue Island. Some 257 kilometers are in Korean airspace south of Jeju.

In aviation, a corridor refers to a route in which aircraft are allowed to fly at a specified altitude for safety reasons.

“Around 970 flights crossed the Akara corridor daily [as of 2019], and the situation was expected to get worse ahead of the Tokyo Olympic Games [scheduled for July], when incoming flights flying to Tokyo through the corridor will rise dramatically,” Kim added.

Under the recent agreement, Korea will take over Japan’s guiding of flights in the Akara corridor in Korean airspace starting March 25. In a second phase, set to begin June 17, a new aviation control system will be created for the zone that is administered by China.

This will enable direct communication between China and Korea. The current arrangements did not allow for such communication, so Korean authorities had to communicate through Japan, which caused communication delays.

Kim sat down with the Korea JoongAng Daily for a virtual interview on Friday. 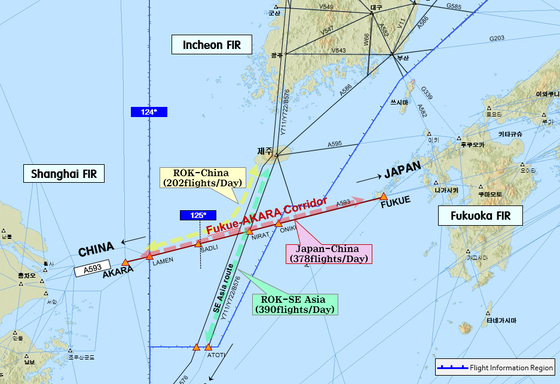 A graphic of the Akara corridor on a map. [MOLIT]

Q. What is the Akara corridor and why was it born?


A. A corridor is an area in which aircraft can fly only at a certain flight level due to special circumstances, in which it is difficult to set an air route. In the Akara corridor, airlines are allowed to use eight altitudes to avoid collisions.

The Akara corridor was established in 1983 to facilitate flights connecting China and Japan. Back then, Korea and China had not established diplomatic relations, so China could not fly across Korean airspace. It had to make a detour to fly to Japan. To iron out inefficiencies, a route flying through Korean airspace was abnormally established under the mediation of ICAO.


Korea established diplomatic ties with China in 1992. What took so long to resolve the issue?

Apart from aviation issues, a lot of other factors have caused the delay, like the diplomacy of Korea, China and Japan. China and Japan have argued that it would be better to keep the current system, despite our repeated argument for change. China has been refusing to revise the system, saying the Akara corridor is an extraordinary matter. Japan also argued that there are no safety concerns in the Akara corridor, and that the system accords with international standards.


Then what brought on the change?

In 2015, the ICAO designated the Akara corridor a "hot spot," a location with a history of potential risk of collision. Worries about the Akara corridor grew in 2018, when a FedEx plane nearly collided with two Korean budget carrier jets, and in 2019, when two commercial aircraft flew too close to each other. That resulted in a high-level meeting among the ICAO Council and the three countries. They formed a working group for negotiations for a new system in 2018.

So far, there hasn’t been a crash in the Akara corridor.


Why didn't Korea reclaim air traffic rights over its airspace in the Akara corridor from China, as it did from Japan?

Also, the length of the airspace belonging to Korea and China in the Akara corridor is too short for the countries to direct traffic. When a flight takes off, it elevates gradually until it reaches a safe height. If Korea and China separately control the short distance of their airspace in the Akara corridor, a flight taking off from Shanghai would have to hastily reach a safe altitude before it entered Korean airspace. This could be dangerous.


Does the agreement bring any economic benefits?