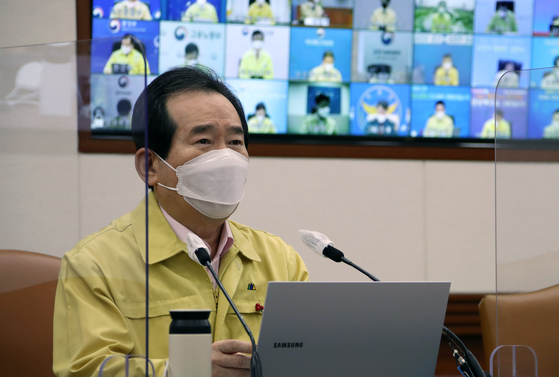 Prime Minister Chung Sye-kyun warns against misinformation surrounding the safety of Covid-19 vaccines at a health meeting on Friday, in response to a survey that showed seven out of 10 people said they would wait to get shots. [YONHAP]


Daily Covid-19 cases in Korea continued on a downward trend Friday, with 513 infections reported from the previous day, but public anxiety about future outbreaks remains high.

With the expiration date for national social distancing measures on Sunday, the government held meetings with top health officials on Friday to determine how to adjust restrictions in light of mounting discontent among small-business owners.

Based on officials’ comments, the likely scenario will be a loosening of operation limits on restaurants and other businesses, though a ban on all social gatherings of five people or more will remain in place until caseloads drop even further.

Thursday’s caseload of 513 was 11 fewer than Wednesday, according to the Korea Disease Control and Prevention Agency (KDCA).

Of the new infections, 484 were due to domestic transmission. There were 180 infections in Gyeonggi, 122 in Seoul, 45 in Busan, 23 in Incheon, 21 each in North and South Gyeongsang, 14 in South Jeolla, 13 in Gangwon, 10 in Daegu, seven in North Chungcheong, six each in Ulsan and North Jeolla, five in Gwangju, four in Sejong, three each in Daejeon and South Chungcheong and one on Jeju Island.

The remaining 29 cases were imported — 16 from the United States, four from the Ivory Coast, two each from Indonesia, Russia and the UAE and one each from the Philippines, South Africa and Nigeria.

A total of 22 new fatalities were reported Thursday, putting the total death toll at 1,217. Patients in serious condition numbered at 374, the KDCA said.

While still higher than the so-called second wave of the virus that hit the greater capital area in late August to September, these numbers are a major decline from the peak of 1,240 daily cases recorded on Christmas Day in Korea.

This signaled social distancing measures had largely been effective at curbing the virus’ spread, though major clusters found at elderly hospitals and religious gatherings continue to produce chain infections.

Another headache for the government lies in pervasive public doubt about Covid-19 vaccines, most palpably seen in a survey published by Seoul National University that showed around 67.7 percent of respondents saying they would wait for as long possible to get inoculated.

“Recently there has been unfounded rumors circulating among the public that vaccines change our DNA structure, or that the government is using vaccines to spy and control the people,” Chung said. “This is matter directly linked not only to public health but also to the credibility of the government, and cannot be regarded lightly.”