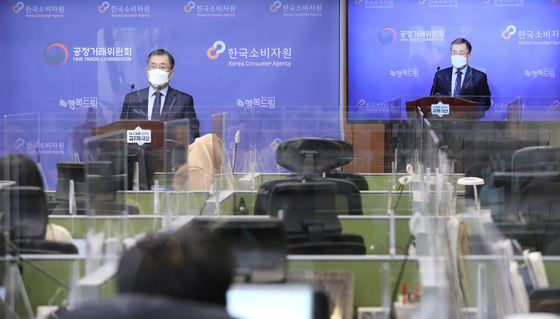 An official from the Korea Consumer Agency holds a press briefing on consumer complaints regarding products sold via SNS platform such as Instagram at the government complex in Sejong on Friday. [YONHAP]

In the first 10 months of 2020, a total of 3,960 consumer complaints were filed over problems related to sales made via social media, according to the Korea Consumer Agency on Sunday.

The consumer agency found that 61.4 percent of the products in question were priced under 100,000 won.

Nearly 69 percent of the products were fashion goods. Other products included health and sanitation products, like protective masks, as well as information and telecommunication goods, such as smartphones.

A buyer in March 2019 purchased a high-end bag for 1.96 million won ($1,800) from a vendor on Naver. The seller notified the buyer that it would take four weeks, as the goods had to be shipped from overseas. A year later, the product still hadn't been delivered, and the seller had vanished.

In March 2020, a buyer purchased two skirts via Facebook’s Instagram. When delivery was delayed, the buyer cancelled the purchase on May 10 and requested a refund. The seller did not respond.

After watching a YouTube video, another person purchased massage equipment for 60,000 won on Aug. 10, 2020. The video advertised that buyers could within one week return the product if they were not satisfied. When the buyer tried to do so, the seller refused.

The consumer agency noted that most of the transactions were made via KakaoTalk or on social media, making it difficult for consumers to know much about the sellers, including the name of the store, the address or even a phone number.

The lack of information exposed consumers to fraud.

The agency argued that the government has to act more aggressively regarding sales made via social media platforms.