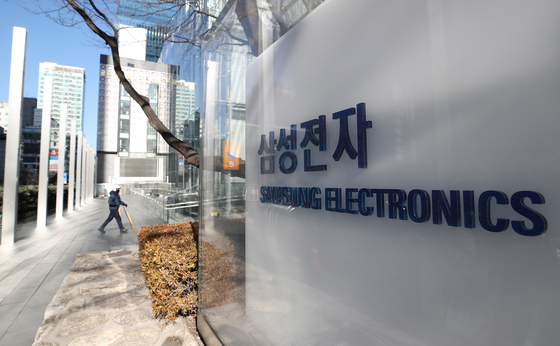 Samsung Electronics' building on Sunday, a day before a court ruling in a bribery case against the company's Vice Chairman Lee Jae-yong. [YONHAP]


Business lobbying groups issued statements over the weekend, pleading leniency in a bribery case involving Samsung Electronics Vice Chairman Lee Jae-yong, with the Seoul High Court due to issue a verdict on Monday.

The Korea Federation of SMEs issued a statement Sunday asking for the court to be merciful, while on Friday, Park Yong-maan, chairman of the Korea Chamber of Commerce & Industry (KCCI), filed a petition appealing for the amicable management of Lee’s case.

“Small- and medium-sized enterprises [SMEs] expect leniency from the judiciary so Samsung Electronics Vice Chairman Lee Jae-yong can lead Korea’s economic growth and recovery from the coronavirus pandemic,” the federation said in the statement.

The federation added that a conglomerate’s investments are directly related to the business development of some 6.63 million SMEs.

“Four out of 10 SMEs are working in partnership with conglomerates and for SMEs that are suppliers to conglomerates, more than 80 percent of their revenue comes from deals with conglomerates,” the lobbying group representing SMEs said. “To overcome the difficulties we face and to prepare for a massive transformation in the global economy after the coronavirus pandemic, we need major job-producing companies to expand investment and carry out corporate social responsibility.”

The lobbying group said Samsung has been putting effort into the mutual growth of conglomerates and SMEs by supporting the establishment of human resources training center for SMEs and digitization at SMEs, such as building smart factory systems.

The group agreed that “wrongdoing needs to be corrected,” in a statement, but claimed that the court should give Lee a chance to lead the country’s economic recovery and growth “considering the role and presence of Samsung in the Korean economy.”

At the end of the statement, the group added that “Samsung should reform its corporate governance structure to fit its reputation as the top conglomerate in Korea and prevent owner risks,” and asked the company for active investment to invigorate the local economy.

KCCI Chairman Park filed the petition to the court, reportedly in the hope of the judges showing mercy to Lee. The content of the petition, however, was not revealed to the public. It is the first time KCCI has filed an official document to the court related to Lee’s trial.

The de facto leader of the country’s top conglomerate was initially convicted and jailed in 2017 for bribing a confidante of former President Park Geun-hye who was ousted on charges of power abuse and bribery. Lee was released by the Seoul High Court in 2018 as it suspended his sentence.

In 2019, the Supreme Court ordered a retrial of Lee, saying he should be found guilty of some bribery charges that were excluded in previous court rulings, such as gifting horses to Park's longtime friend Choi Soon-sil. His fate will be decided Monday, following the ruling.