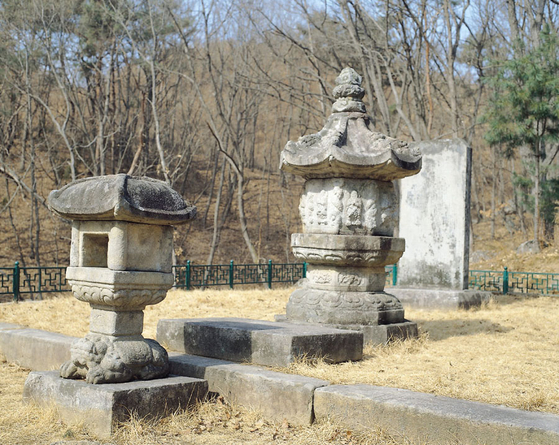 This octagonal stupa dedicated to State Preceptor Bogak is located at Cheongnyongsa Temple which lies on the mid-slope of Cheonggye Mountain.

When the preceptor passed away at the age of 73 in 1392, (the first year of the reign of King Taejo, the founder of the Joseon Dynasty which lasted from 1392-1910) the King ordered the stupa be erected and named it Jeonghyewolyung.

This stupa is octagonal in shape.

The main body, with a roof on its top, stands on a three-tier pedestal beneath a stone platform.

The corners of the octagonal upper base stone are rounded.

Lotus flowers are carved on the lower and upper base stones.

A lion and a dragon in clouds are engraved alternately around the middle base stone.

On all sides of the octagonal body are elaborately carved eight guardian generals bearing weapons.

An entasis column is carved at each corner of the body.

Snakes wind around each column.

The roof is beautifully upturned at the corners of the eaves, patterned after wooden architectural structures of the period.

Dragon's heads are carved on the corners of the eaves.

Built in the third year of the reign of King Taejo of Joseon (1394) when bell-shaped ones prevailed, this octagonal stupa, with its unique shape and excellent sculptural workmanship, is a representative example of early Joseon's formative arts.