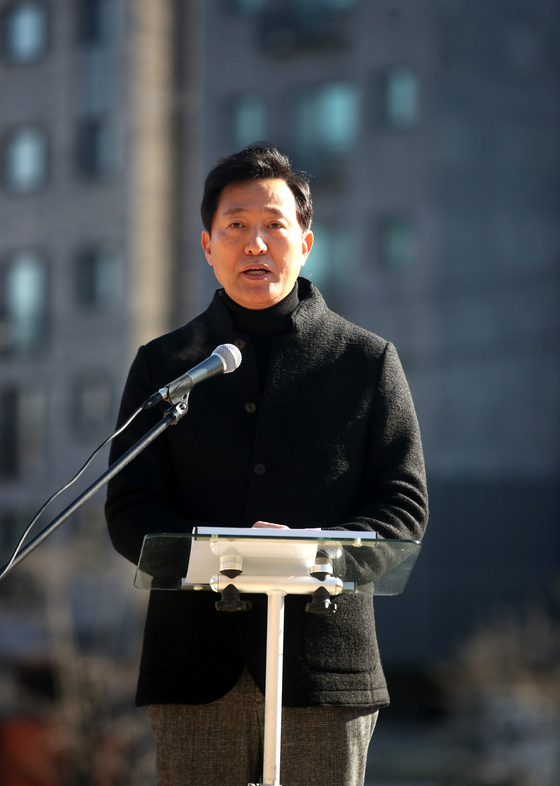 
Oh Se-hoon is running for Seoul mayor a decade after he resigned from that position over free school lunches.

“I stand here again after having learned from my previous mistakes,” Oh said during a press conference Sunday at a park in Gangbuk District, northern Seoul.

Oh was mayor of Seoul from 2006 to 2010 and re-elected, but resigned in 2011 over a failed campaign to end free lunches for students. His successor was Park Won-soon, who was in office for a record length of time before his suicide last year.

“Ten years ago, I let down the people of Seoul and members of my party with my resignation,” he said, addressing dozens gathered at the Dream Forest in Gangbuk District. “I decided to jump in the race to stop the botched policies of the Moon Jae-in administration, with hopes that we will make things right first in the capital city of the nation.”

Oh is a member of the main opposition People Power Party (PPP) and is the 10th member of the party to announce a bid for Seoul mayor.

Oh’s bid comes after Ahn made it clear he would not be joining the PPP or merging the People’s Party with the PPP to follow the wishes of some PPP members, who called for these measures to heighten the chances of an opposition candidate winning the race.

Ahn, running for Seoul mayor for the second time, formed a committee for the campaign within his party on Friday, according to Hankook Ilbo. In a party meeting on Thursday, Ahn said that “the people will decide” whether the parties ought to merge and produce a single candidate.

The by-election for Seoul mayor will be held on April 7. Former Mayor Park Won-soon was re-elected for a third and final term in 2018, which was to end in 2022. He committed suicide in July 2020 after his former secretary accused him of sexual harassment.

The mayor elected in April will hold the office for a year to complete Park's term. Since Park’s death, deputy mayor Seo Jung-hyup has been acting mayor.

During the press conference on Sunday, Oh emphasized his previous experience as the city’s mayor.

“The hike in apartment prices in Seoul during the Moon Jae-in administration has worsened the gap between the poor and the rich,” Oh said at the press conference. “On top of that, the Covid-19 pandemic has driven many in the city out of work. What the city needs now is not a rookie to experiment with policies for a year, but a seasoned expert who can start rolling out policies that will fix the situation from day one. I’ve done that for a full five years.”

In 2011, Oh worked to stop free lunch programs at elementary, middle and high schools in Korea. He staked his mayorship on the policy, vowing to resign if he failed to end what he called a populist policy. The policy was put to referendum, which was nullified due to low voter turn-out. Oh resigned two days later.

In addition to cooling the housing market in Seoul and expanding green spaces in the city, Oh pledged to support tourism-related businesses in the city.