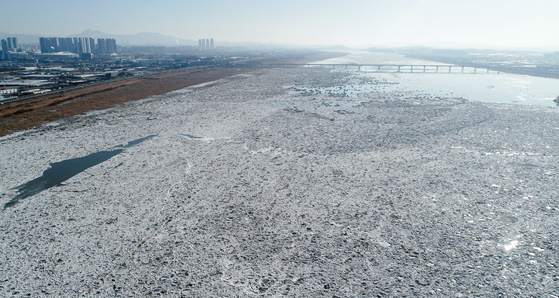 Ice floes, or sheets of ice, are formed on a section of the Han River between Goyang and Gimpo, both in Gyeonggi, Sunday, as the morning low dipped to minus 10 degrees Celsius (14 degrees Fahrenheit). [YONHAP]

Most of Korea is expected to see some 3 to 10 centimeters (1.2 to 3.9 inches) of heavy snow by Monday morning, the weather agency said, sparking concerns of rush-hour mayhem.

The Korea Meteorological Administration (KMA) said early Sunday afternoon that snow was expected to fall across most parts of the country from around 6 p.m. due to snow clouds formed in the Yellow Sea and blown over the country by westerly winds. Snow will slowly ease off toward midnight, only to pick up again on Monday morning.

Gagwon’s Yeongseo region is expected to see the largest amount of snow, at 15 centimeters.

The KMA Sunday issued preliminary heavy snow warnings for many areas including Seoul, Gyeonggi and Daejeon, warning they could see large amounts of snow in a relatively short period of time.

The KMA warned of possible damage to infrastructure and advised people to plan how they’re going to get to work in advance.

Monday morning temperatures won’t be as low as on Sunday morning due to warm southwesterly winds, the KMA said. Temperatures in Seoul are likely to be minus 4 degrees Celsius, or 24.8 degrees Fahrenheit.

The Seoul Metropolitan Government said in a statement that the capital’s district government offices, the Seoul Facilities Corporation and other public institutes in charge of managing roads have gone into “emergency duty” mode from Sunday noon to prepare for Monday. Some 2,330 people and 870 snowplows have been set aside for urgent work, such as clearing snow and spraying de-icing chemicals on steep pathways to prevent passersby from slipping and falling.

Some 300 police officers will be dispatched to 221 different areas in Seoul between Sunday night and Monday morning to help with traffic control, the city continued. In case more snow falls than expected Monday, the Seoul government said it would operate more subway cars during the morning rush hour to help commuters get to work.

Clueless on the weather