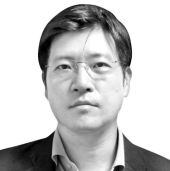 
I did not have many opportunities to cover former president Roh Moo-hyun in depth, but a certain scene lingers in my memories. It was during a by-election for a legislative seat representing a district in Busan in August 2002 — four months before the presidential election in December. I was able to sit down with Roh — then the presidential candidate of the ruling Millennium Democratic Party — at a restaurant in the city with my fellow reporters. At the time, Roh was campaigning for his party’s candidate in the by-election.

As the so-called “Roh wave” had been knocked down a peg by that time, his popularity was on the decline. As we sat down, he crooned a self-made song of sorts decrying why no one understood him. He passed down chopsticks to the reporters himself. As the by-election wasn’t going smoothly, the atmosphere was apparent at that dinner. I don’t’ even remember what was talked about during that meal. But I do remember just how hard Roh, a shy man, tried to break the ice. Four months later, after a great deal more hardships, Roh won the presidential election.

As tragically as his administration ended, Roh’s five-year presidency was a rollercoaster ride. When he was impeached by the National Assembly in 2004, he sighed, “My politics must be too extreme, given how often I am pushed into the corner.” He faced harsh criticism about the way he sowed divisions among the public between reformists and anti-reformists. But his aides say he was a president who consciously worked not to be swayed by ideology. The president often said his “life’s goal is uniting the people” and always took great care not to be “a president just for [his] supporters.”

He brought in figures closer to pro-U.S. conservatives like Kim Hee-sang and Ban Ki-moon as a check on his liberal cabinet and aides. Competent figures, even if they were conservative, were appointed ambassadors to key countries. Roh even pushed for policies opposed by his supporters, like the Korea-U.S. FTA or troop deployments to Iraq, if he felt they were necessary. This is why he was often mocked for “signaling left while turning right.”

Even so, he was unable to win over as many people as he wanted. He made this comment to his successor Lee Myung-bak in a phone call to congratulate Lee on his victory in the December 2007 election: “After serving as president, it is a special seat that requires all of the people’s help […] There are so many things a president cannot do.”

The fifth year of the Moon Jae-in presidency, which undoubtedly is the second season of the Roh era, began with gloom. Each day is a new record low for the president’s approval rate. His failures in real estate policies and a defeat in the Justice Minister Choo Mi-ae versus Prosecutor General Yoon Seok-youl feud proved especially disastrous.

For season two of anything to succeed, the conditions are simple: Keep the good parts of season one, while improving on the flaws. What was needed was a reflection on why season one failed to gain support from the people. But the reality was the opposite. Even the most extreme behavior from this administration’s supporters was defended. There was not a single case of an opposition figure being hired. Some people are amazed that Moon’s inauguration speech three years and eight months ago included the words: “I will become a president for all the people. Today is the day true national unity begins.” Words like “unity” or “tolerate” ring empty today.

An unpopular season two is happening not only in Korea but in Japan as well. The public is breaking away from the Yoshihide Suga administration, which is widely regarded as a rehashing of the Shinzo Abe government. Approval numbers that began at 60 to 70 percent have been halved in only four months.

The reasons are on a par with Korea. Suga has failed to learn from Abe’s failures. The biggest problem with the seven years and eight months of the Abe government was its lack of communication with the public. Abe was constantly criticized for ignoring the people, albeit working hard. Suga initially gained the spotlight for his background as a commoner who rose to the premiership, but his flexibility failed to match even Abe, who was born into a prestigious family. The Suga government rejected six scholars from membership in a science advisory panel due to their criticism of the administration. Suga told people to eat at home, but had an expensive steak dinner outside. Many Japanese colleagues say they are even starting to miss Abe.

The leaders of the two countries are facing parallel risks in their season twos, after learning nothing from their predecessors.