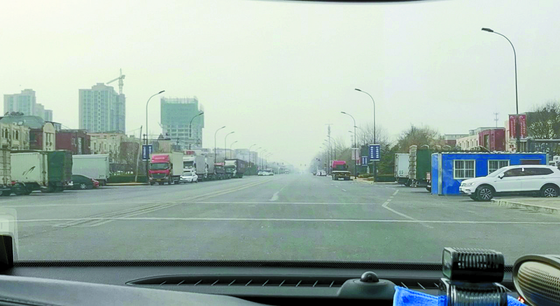 The scenes of Langfang, a city in lockdown, an hour from Beijing, on Jan. 13. [PARK SUNG-HOON]

PARK SUNG-HOON
The author is a Beijing correspondent of the JoongAng Ilbo.

I wanted to see the sight of a city in lockdown. Twenty-three million people in three cities in Hubei, China, are stranded. On Jan. 13, I headed to Langfang, a city in lockdown, an hour from Beijing by car. If I were to enter the city, I would be locked in, so I intended to approach the entrance and survey the mood.

As highway traffic constantly decreased, the roads became empty about 10 kilometers (6 miles) outside of the city. There was no security police or virus control vehicles at the toll plaza for Langfang. What made me feel the blockade was the bleak atmosphere. Local officials told me that if I went in, it would be hard to get out as the city was already in lockdown.

I turned around and headed back to Beijing and my problems began. After less than 1 kilometer, I was stopped by the police. “Let me see the nucleic acid test result,” he said. I explained that I had come from Beijing and turned around before entering Langfang, but it was no use. The police repeatedly said I could not proceed without a test result. I had to enter Langfang to get a nucleic acid test. There was no other option.

I’ve seen the bleak scenery of Wuhan on videos, but this was the first time I had entered a city that was in lockdown. There was no cars or people on the street. The empty city could not be described simply as a “ghost town.” In contrast, there were people at the test site. Everyone was getting tested, and because of the crowd, the result would be available after two days.

Without the nucleic acid test result, I could not check into a hotel. As all buildings were closed, it was hard to find restaurants or restrooms. Last year, when the Covid-19 outbreak was serious, criminals on the run across China reportedly turned themselves in. It was understandable. They could not even feed themselves without proving they were not infected, so it must have been better off being in prison.

As safety was the priority, I wouldn’t criticize the decision. But the opportunity cost of putting a city on pause was tremendous. Korean companies in Langfang had to shut down factory operations because everything stopped. Workers commuting from Beijing could not travel. Countless business owners, deliverymen and drivers must have lost income.

As of Jan. 14, only one positive case was found over a two-week period in Langfang, a city with a population of 4.29 million. So why was the city locked down so strictly? Local media reported, “The city is a moat defending the capital.” This is the reality of China’s disease control today.