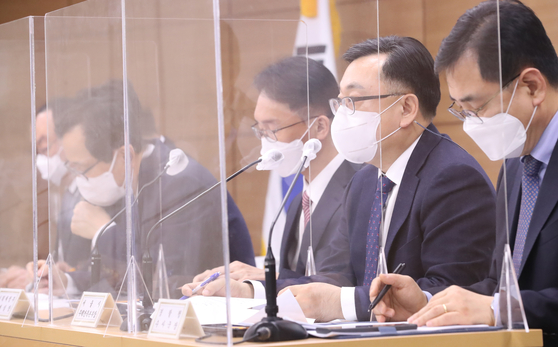 Officials from the Ministry of Economy and Finance, Ministry of Land, Infrastructure and Transport, Financial Services Commission and other government authorities related to housing policies participate in a joint press briefing held Monday at Sejong Government Complex. [YONHAP]


Property taxes will increase in June as planned, the government confirmed, as the administration seeks to compel sales that it hopes will lead to an increase in supply and a stabilization in prices.

Neither a delay of the implementation nor an easing of terms are being considered, according to a number of ministries and authorities, including the Ministry of Economy and Finance, the Ministry of Land, Infrastructure and Transport and the Financial Services Commission.

They made the comments at a briefing at the Sejong Government Complex on Monday, where they also said they plan to boost supply with redevelopment and more new towns.

Unconfirmed reports had said that the scheduled tax might be adjusted or property owners might be given more time or incentives to unload their real estate.

“As the capital gains tax and comprehensive real estate tax on multiple-home owners will shoot up from June 1, we are expecting they will sell houses before heavy taxation takes effect,” said Lim Jae-hyun, head of tax and customs office for the Ministry of Economy and Finance. “Exactly how much increase is hard to tell now, but we are expecting more houses to be sold as June draws near.”

Under the revised taxation system, the comprehensive real estate tax rate on the owner of two or more properties in areas designated by the government as speculative will be raised from between 0.6 to 3.2 percent to 1.2 percent to 6 percent. The capital gains tax for selling houses will also be raised.

According to the Finance Ministry, for those selling a 2.5-billion-won ($2.3 million) house and gaining 1 billion won from the sale, the capital gains tax will be 110 million won higher after June 1.

The government said it will add redevelopment projects led by public developers, including the state-run Korea Land & Housing and Seoul Housing & Communities.

The government said it is also speeding up development of third generation new towns in Namyangju, Hanam, Incheon, Goyang and Bucheon.

While an outline of a new set of measures, the 25th real estate market cooling-measures, were expected at the briefing, officials said a new guideline will be released before Lunar New Year.

The Moon Jae-in administration has been struggling with real estate policies as it failed to stabilize prices despite 24 sets of measures put in place to cool the market.

Moon said that the administration will focus more on increasing housing supply while maintaining policies to reduce speculation.