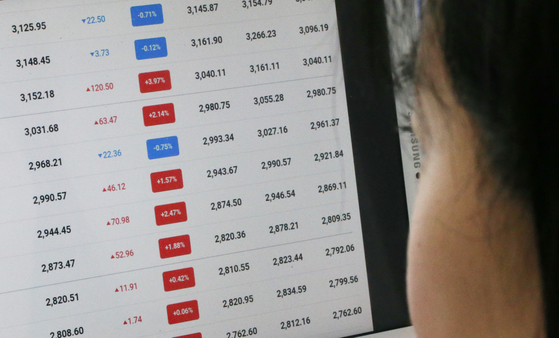 A resident of Seo District, Daejeon, looks at stock prices on Jan. 14. [NEWS1]


Even teenagers are investing in stocks these days.

An 18-year-old high school student opened a stock trading account last month. As she is under the age of 19, she had to get her father's permission.

The young investor entered the stock market with about 500,000 won ($450) she collected from a part-time job and allowance. She invested in Samsung Electronics, and the value of her holdings increased 50,000 won this month.

“I earned some money that usually comes after a few hours of working through stock investment," she said. “It’s just so amazing.”

According to Kiwoom Securities, some 115,603 people under the age of 19 opened stock trading accounts last year. That’s nearly 17 times more than compared to a year earlier.

Sometimes, it's the kids asking the parents to allow them to get into equities. Sometimes, the parents lead, giving their children some shares to teach them investment techniques.

Brokers say that people of all ages are driving the current boom.

Teenagers collect data and information through social media to choose where to invest.

A 15-year-old living in Paju, Gyeonggi, said he first started paying more attention to the stock market in May when he heard one of his friends earned money through it.

He barely got permission from his parents and jumped into the stock market with about 1 million won from his allowance.

He invested in major large-caps, such as Samsung Electronics and Hyundai Motor, and the overall posted gains some 15 percent to 20 percent.

“I study through YouTube videos,” he said. “The more I study about stock investment, the more I feel like I'm going further than my friends.”

Some teenagers are even running social media sites to help their friends to start investing.

Shin Je-won, a 19-year-old high school student who lives in Changwon, South Gyeongsang, runs a social media site offering information and analysis about the stock market. Shin encourages his friends to start making stock investments and advises them what to buy.

“Stock investment is the one and only way for a student who was not born with a ‘gold spoon’ to earn money legally,” Shin said. “I use the profit as my allowance.”

According to Shin, he first jumped into the stock market with about 2 million won. He invested in an airline stock in June, and the gains reached about 30 percent as of December.

In August, he first entered the stock market with about 2 million won because he thought saving the money in the bank won't benefit him in any way.

“I opened a Facebook account to tell others that stock investment is something that even a middle school student can earn money from,” he said.

Parents are concerned about their children entering the market at a young age.

Due to uncertainty about the future, "even teenagers are jumping into the stock market,” said Kim Tae-gi, an economics professor at Dankook University. “The development of social media and YouTube, which offer teenagers the chance to learn about stock investment, is also another driving force. “

Kim says he is not entirely optimistic about the trend.

“It seems like schools — which are responsible for teaching finance and economy — don't teach them about capitalism. But students believe that reality is at the center of capitalism,” Kim added. “Now teenagers even think that ‘studying’ is not enough.”

“Parents must advise their children so that they can stay away from gambling way of stock investment and only see stocks as a stepping stone for future growth.”