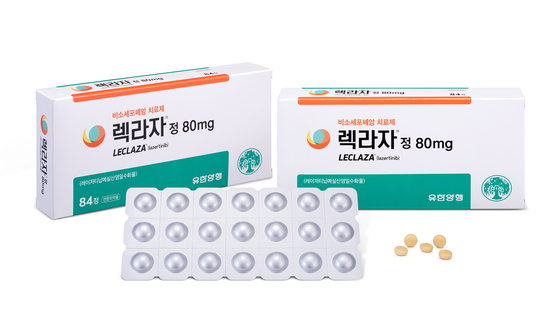 A new drug is based on novel compounds that have not existed in the market before. According to Yuhan, it takes around 15 years and 1 to 2 trillion won ($904 million to $1.8 billion) for a new drug to be authorized and sold worldwide.

Yuhan’s lazertinib is the 31st new drug to receive market authorization in Korea. This is also the first time in three years that the drug regulator had granted such approval, since July 2018.

The product will be sold as Leclaza tablets in Korea. For Yuhan, Korea’s largest pharmaceutical firm by market cap, it is the second new drug to be permitted in its 94-year history.

The company acquired the rights for lazertinib in 2015 from a Korean bio venture, Oscotec, when the substance was still in the pre-clinical phase. In 2018, Yuhan signed a license-out deal with Janssen which gave the multinational firm the right to sell lazertinib worldwide, apart from in Korea, where Yuhan retained the rights. Janssen is currently conducting Phase 3 clinical trials for lazertinib.

According to Yuhan, 30 to 40 percent of non-small cell lung cancer patients that receive conventional treatments see mutations occur in a gene called the Epidermal Growth Factor Receptor (EGFR), which is supposed to suppress the growth of cancer cells. Among this group of patients, approximately 50 to 60 percent develop a resistance to existing treatments.

Yuhan teams up with AbClon to develop Covid treatment