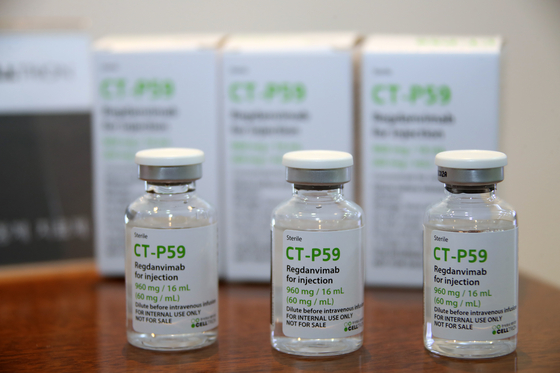 An advisory board put together by the Ministry of Food and Drug Safety gave a positive opinion on granting a conditional use approval for Celltrion’s Covid-19 treatment candidate CT-P59, the ministry said Monday.

Comprised of eight experts hired from outside the government and four ministry officials, the advisory board concluded that CT-P59’s Phase 2 trials produced statistically meaningful results in confirming its efficacy and safety. The discussion was held Sunday and was based on documents submitted by the bio firm.

This is the first among three advisory sessions that CT-P59, also known as Regkirona or regdanvimab, is obliged to go through until it receives a conditional use approval.

In terms of efficacy, the board noted the treatment’s effect in accelerating recovery from Covid-19 symptoms. According to data submitted by Celltrion, the treatment candidate shortened recovery time by approximately 3.4 days compared to the placebo group.

While the treatment candidate did have a tendency to reduce active viruses in the body, the board said it did not find a statistically meaningful change in the speed of transition of a patient testing from positive to negative. As none of the test takers, either from the placebo or the group that received CT-P59, died, it was impossible to confirm the substance’s effect in preventing death.

Regarding safety, the board concluded that CT-P59 did not cause any life-threatening issues. During Phase 2 clinical trials, Celltrion monitored participants for a 28-day period following the injection. Some recipients experienced adverse reactions at a  light or moderate level, but according to the ministry, the number was similar to the placebo group that was not treated with CT-P59.

“Taking into account all of the findings, the advisory board concluded that Regkirona should be granted authorization on the condition that [Celltrion] conducts Phase 3 clinical trials,” said the Ministry of Food and Drug Safety in a Monday statement.

The board also suggested Phase 3 clinical trials should provide clear clinical proof that the treatment candidate is indeed effective in lowering the possibility of light- and moderate-level symptom patients escalating to severe-symptom patients.

Another proposal was to conduct a separate round of clinical trials that could test CT-P59’s efficacy on patients receiving oxygen therapy when it is diagnosed with other drugs.

CT-P59 would be the most effective in light- to moderate-symptom patients, the board added, including patients who showed symptoms in less than seven days and those who are not dependent on an oxygen supply.

“If the remaining procedures go as planned, we expect [CT-P59] to be supplied to the front line of quarantine efforts by early February,” said Prime Minister Chung Se-kyun in a press briefing Monday.

HHI and Aramco signs a memorandum of understanding