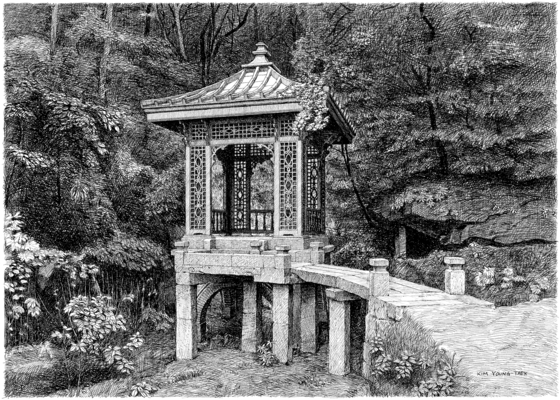 Pen art ″Seokpajeong″ by Kim Young-taek (1945-2021) will be part of the retrospective of the deceased artist at the Insa Art Center in central Seoul. [INSA ART CENTER] 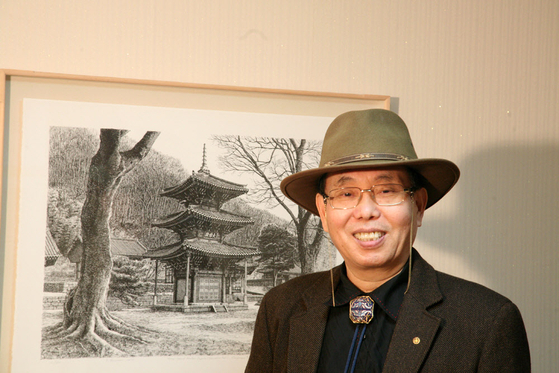 This undated photo shows artist Kim Young-taek with his pen art. He passed away from cancer on Jan. 13. [JOONGANG ILBO]


Kim Young-taek (1945-2021), often dubbed the “master of Korean pen art,” passed away on Jan. 13, a week before his retrospective starts on Wednesday. He was 76. He had been battling colorectal cancer, according to his family.

“Kim Young-taek made an unparalleled achievement in restoring the world’s cultural heritage with pens,” the Gana Foundation for Arts and Culture, which has been preparing for his retrospective, said in a statement last Thursday.

The foundation added the exhibition will be held as scheduled at the Insa Art Center in central Seoul. The exhibition will feature 40 pieces of his pen art, in which old historic buildings of Korea and other countries, such as the Jongmyo Shrine in Seoul and the Colosseum amphitheater in Rome, are elaborately depicted with hundreds of thousands of lines.

Kim was born in the Western port city of Incheon in 1945. He displayed great drawing skills from an early age. He said in an interview that as a middle school student he hand-drew a paper bill for fun which the adults around him all mistook for a real paper bill, so he got a scolding from his father. Later, he studied design at the prestigious College of Art at Hongik University and then obtained a master's degree in business administration at Soongsil University.

Kim was active as an industrial and graphic designer in his 30s and 40s. One of the representative products he designed was the Samsung Camera SF-250 that was produced in 1988. He was named in 1993 as one of the 54 “Design Ambassadors,” an honorary title for the best designers granted by the International Trademark Center.

A turning point in his life came in 1994. After participating in the inaugural edition of the World Logo Design Biennial in Ostend, Belgium, he made a visit to the Louvre in Paris. It was at the museum that he became fascinated by the pen illustrations of French artist Gustave Dore (1832-1883). At the age of nearly 50, he changed paths from a successful designer to a pioneer of pen art, which was neither a popular nor familiar genre of art in Korea. 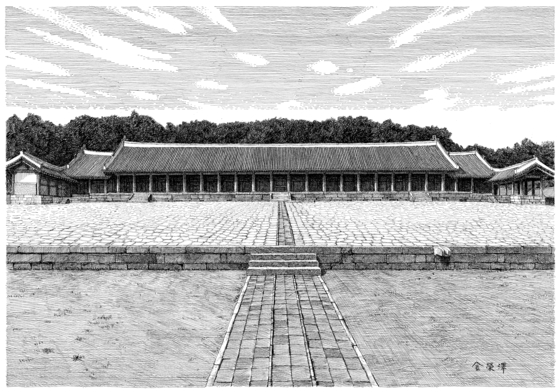 The pen art ″Jongmyo″ by Kim Young-taek (1945-2021) will be part of the retrospective of the deceased artist at the Insa Art Center in central Seoul. [INSA ART CENTER] 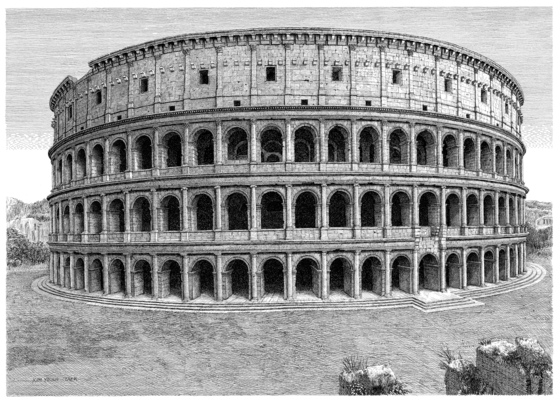 The pen art ″Colosseum″ by Kim Young-taek (1945-2021) will be part of the retrospective of the deceased artist at the Insa Art Center in central Seoul. [INSA ART CENTER]


Kim self-studied pen art and developed his own unique style. His work required an exhausting process and extreme self-control. For each piece of work, he drew 500,000 to 800,000 lines with 0.03- to 0.05-millimeter-thick pens which he sharpened with sandpaper.

With the meticulous pen lines, Kim focused on portraying Korean architectural heritage. He traveled to various parts of the country to observe famous old buildings in person and recreate them in minute detail. He regularly published his artwork in the JoongAng Ilbo, the mother paper of the Korea JoongAng Daily, from 2001 to 2012, except for one year when he had to rest due to serious shoulder pain.

Kim’s works are in realist style but he didn’t always depict buildings as they are in the present. For buildings that were partly destroyed, he restored the lost parts based on thorough historical research. Through his pen art, he even recreated buildings of which there are no remnants, such as the nine-story wooden pagoda of Hwangnyong Temple, the biggest temple of the ancient Silla Kingdom (57 B.C.-935 A.D.) later destroyed during a war in 1238. Kim described himself as an “artist that records architecture” and that his job includes restoration of damaged cultural heritage.

Later, he also drew world heritage sites outside Korea, such as the temple of Horyu-ji in Nara, Japan, and Hagia Sophia in Istanbul. 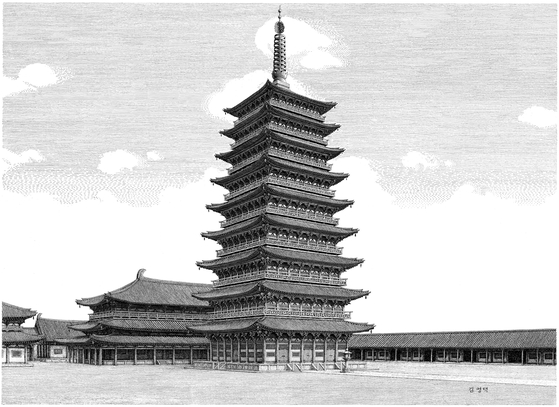 
Kim’s pen art has also been celebrated for its unique perspective, dubbed the “Kim Young-taek perspective.” At a glimpse, it looks just like the perspectives of Western classical paintings and photography. However, Kim’s perspective is delicately different, as it considers a subject’s proportion and impact felt by a human viewer. Kim repeatedly said, "The human eye zooms in on what is far away... While I depict the subject elaborately, I also focus on expressing the sense felt by a firsthand viewer.”

In efforts to spread pen art in Korea, he served as the president of the Korean Pen Art Association and was known to be generous in sharing his expertise with others.

In an interview with the JoongAng Ilbo during his solo exhibition in May 2019, he revealed that he was fighting cancer.

“The moments of immersion and trance that I experienced while working on pen drawings were a blessing to me,” he said in the interview.

Kim is survived by his wife and two sons. His retrospective, sponsored by the National Trust for Cultural Heritage, will run through Feb. 15.