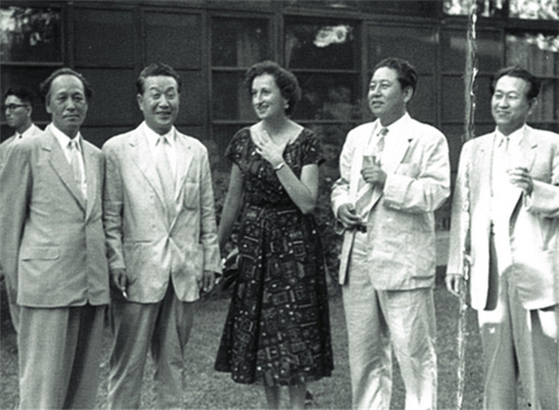 This photo shows American scholar Ellen P. Conant, center, and Korean artists visiting the World House Gallery in New York in 1957 to decide which artworks to feature in a contemporary Korean art exhibition. It is part of the exhibition ″Homebound Journey: Non-Korean Researchers' Study of Korean Arts.″ [KIMDALJIN ART ARCHIVES AND MUSEUM]


It was not a Korean but a German missionary who wrote the first book about the overall history of Korean art, according to Kim Daljin Art Archives and Museum.

The exhibition titled "Homebound Journey: Non-Korean Researchers' Study of Korean Arts" features more than 100 pieces of material about foreigners who studied Korean art, including the books they authored, their interviews published in newspapers and magazines and their photos.

The foreign researchers range from historic figures such as Muneyoshi Yanagi (1889-1961), the famous Japanese art critic and founder of the mingei (folk craft) movement, to contemporary art critics and historians such as Charlotte Horlyck, lecturer in Korean art history at SOAS, University of London, and Mika Furukawa, who focuses on minjung art or people’s art which refers to Korean social realism art in the 1980s.

The exhibition also includes the pamphlet of the first overseas exhibition of Korean art in 1958 after the country's liberation from Japanese colonial rule (1910-1945). The show titled “Contemporary Korean Paintings” was organized by American scholar Ellen P. Conant.

Quoting French author Marcel Proust (1871-1922) as saying, “The real voyage of discovery consists, not in seeking new landscapes, but in having new eyes," the museum director Kim Daljin said, “The exhibition intends to look back on our art with new eyes.”

The exhibition runs through April 24. The museum has also published a book of the same title as the exhibition.