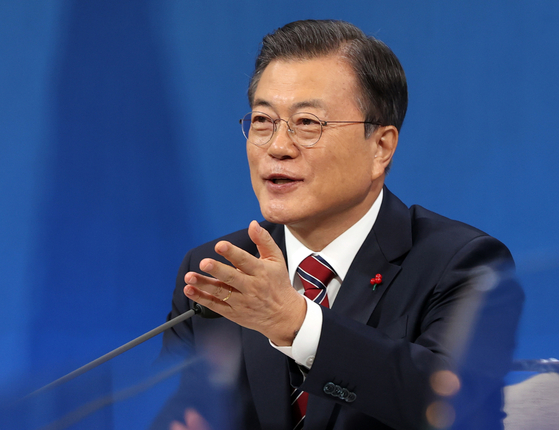 President Moon Jae-in said he looks forward to North Korean leader Kim Jong-un making a visit to the South in the future, reaffirming his belief that Kim still has the “will for peace, dialogue and denuclearization” in his New Year's press conference Monday.

Moon said he will urge U.S. President-elect Joe Biden to uphold and build upon the principles laid out in the 2018 North-U.S. Singapore agreement, in which Pyongyang agreed to complete denuclearization in exchange for security guarantees from Washington, rather than starting from square one.

“The inauguration of the new Biden administration could be the impetus for a fresh start for both North-U.S. and inter-Korean dialogue,” said Moon.

Moon called the Singapore Declaration of June 12, 2018, signed between Kim and U.S. President Donald Trump in their first summit, a “very important declaration in terms of denuclearization and establishing peace on the Korean Peninsula,” but said it was “regrettable” that more concrete achievements were not built upon it.

Moon said he will try to hold an early summit with Biden to make sure that Seoul and Washington stay on the same page on the Korean Peninsula peace process and other bilateral issues.

“I believe our government holds in common various principles with the new Biden administration, such as multilateralism and alliance values, and that we are on the same wavelength in some aspects,” said Moon.

In response to concerns that the new U.S. administration may put the North Korea issue on the back burner and take time setting a foreign policy direction, Moon noted that Biden himself has extensive expertise in diplomatic matters both as a former chair of the Senate Foreign Affairs Committee and as a former vice president. Biden, Moon noted, is “well-versed in inter-Korean affairs to the point where he has supported President Kim Dae-jung’s Sunshine Policy in the past.”

But Moon acknowledged that the Biden administration is expected to favor a bottom-up approach rather than a top-down approach in negotiations with the North.

Moon also said that the two Koreas can discuss joint military exercises between Seoul and Washington if necessary through an inter-Korean joint military committee, recognizing the drills as a “sensitive” issue for Pyongyang.

Moon stressed that such regular joint combined exercises with Washington are “defensive in nature.”

He added that Seoul-Washington military exercises, in the larger picture, “is an issue that can be discussed within the process to establish denuclearization and peace on the Korean Peninsula.”

Moon explained his push for a declaration to end the 1950-53 Korean War, a matter Seoul plans to convey to Biden’s nuclear negotiators when they are named.

Likewise, Moon said that Kim’s visit to South Korea was a matter already agreed upon by the two sides but stressed that he was open to the timing and location of another meeting with Kim to “build up trust” in the meantime.

Moon touched upon other important foreign affairs and security matters during the press conference, such as tensions over history issues with Japan including the Seoul Central District Court ruling earlier this month ordering the Japanese government to compensate a dozen Korean victims of its wartime military sexual slavery.

Moon noted that there are various issues that have to be resolved with Japan, including export restrictions, compensation for forced labor victims and the so-called comfort women issue, urging a diplomatic solution.

“History issues are history issues, and future-oriented development between Korea and Japan also needs to move forward,” he said, adhering to his two-track approach to Seoul-Tokyo relations.

He admitted that the court decision on the comfort women issue earlier this month “is truthfully a bit perplexing” amid such bilateral tensions. He added that Korea “recognizes the fact” that the comfort women deal of Dec. 28, 2015, including an apology by the Japanese government and a one-billion-yen ($9.6 million) fund for the victims, was signed between the two countries’ governments.

On China, Moon said that he will continue to arrange a visit for Chinese President Xi Jinping to Korea as soon as the Covid-19 pandemic stabilizes.