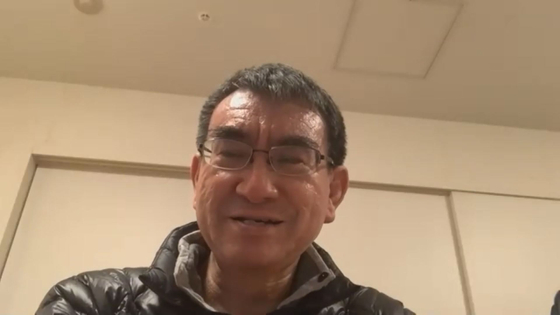 Taro Kono, the Japanese minister for administrative and regulatory reform, speaks in an interview over Zoom from Tokyo last Thursday, discussing Covid-19, Korea-Japan relations and the Tokyo Olympics. [SCREEN CAPTURE]


Taro Kono, the Japanese minister for administrative and regulatory reform, said that in the post-coronavirus era, South Korea, Japan and the United States “need to become important partners” in areas such as security assurances.

“Korea and Japan are actually countries that are closest neighbors and can become partners that are on the same wavelength,” Kono told the JoongAng Ilbo in an exclusive interview published Monday. “Amid uncertainties in U.S.-China relations, it is very important for Korea and Japan to keep in step.”

However, Kono, who served as defense minister and foreign minister in the Shinzo Abe administration, reiterated Tokyo’s stance on a recent key Korean court ruling siding with victims of the Japanese military’s wartime sexual slavery, saying the decision “infringed upon state immunity.”

On Jan. 8, the Seoul Central District Court ruled that the Japanese government must pay 100 million won ($91,100) each to 12 so-called comfort women who were forced into sexual slavery by the Imperial Japanese Army during World War II.

The court rejected Tokyo’s claims of state immunity — a principle of international law that a particular court does not have jurisdiction over a state without its consent — saying Japan had committed crimes against humanity in violation of international standards and norms and recognizing the physical and psychological pain suffered by the victims.

Kono, who has been working from home since Jan. 8 after Tokyo declared a state of emergency over a spike in Covid-19 cases, conducted the interview last Thursday through a videoconference.

He lauded Korea’s digitalization and said Japan “should learn from this aspect.”

As the minister in charge of administrative and regulatory reform in the Yoshihide Suga administration, Kono is overseeing Japan’s digitalization reform process. Kono was described in a recent Mainichi Shimbun poll as the person best suited to become the next Japanese prime minister.

Kono noted that because of the coronavirus pandemic, the Tokyo Olympics, slated for July, “will only be possible if vaccination takes place, so we will prepare for this thoroughly.”

In an interview with Reuters last week, Kono said, “We need to do the best we can to prepare for the Games at this moment, but it could go either way" — comments considered to be the strongest remarks so far from a Japanese cabinet minister about uncertainties over whether the Olympics can be held.


The Covid-19 pandemic has revealed that Japan’s digitalization is relatively lagging. Why is that the case?
Over the past 30 years, the Japanese government has been bearing the cost of social security contributions and interest from the national debt and has barely invested in digitalization. It has been continuously delayed because it was not immediately needed. Also, two-thirds of Japan’s IT personnel are concentrated in large corporations like NEC, thus the reality is that the government’s own [IT development] capability is also limited. Japan has 1,700 local governments, so local governments are each developing their own systems and using them. There are people who are quite sensitive about protection of personal information, so it isn’t easy for the government to connect the data and put it to use. However, through Covid-19, the Japanese people have felt the need for digitalization. I think they share the notion that there is a need to speed along the current rate of digitalization.


Will the Tokyo Olympics be able to be held as planned amid concerns over delays in vaccinations?
Vaccinations begin in February. Seeing the schedule, I don’t think it will be too late. However, those who need it the most should be prioritized for inoculation. The Olympics are only possible if vaccination takes place, hence it has to be done properly.


You faced many difficult situations in Seoul-Tokyo relations during your time as foreign minister and defense minister under the Abe administration, such as the Korean Supreme Court rulings on compensation for wartime forced labor victims in late 2018.
During my time as foreign minister, my closest counterpart was Korean Foreign Minister Kang Kyung-wha. In 2018, we marked the 20th anniversary of “A New Japan-Republic of Korea Partnership toward the 21st Century” [a declaration on improving bilateral ties signed between Korean President Kim Dae-jung and Japanese Prime Minister Keizo Obuchi in October 1998]. A task force comprised of the two countries’ experts made proposals on how to advance bilateral relations, and Minister Kang and I held high expectations. That is when the Korean Supreme Court rulings on compensation for forced laborers came out. Everything built up with Minister Kang came to a halt. I find that very regrettable.


You asked Korea to take concrete measures at that time.
My grandfather’s generation spent a lot of time to come up with the 1965 treaty on basic relations between Korea and Japan... The treaty was agreed upon by the two countries and is a promise made between the countries and the basis of our relations.


What is your view on the recent Seoul district court ruling to compensate wartime sexual slavery victims?
It is an unthinkable ruling that violates the international principle of state immunity. Though there is the separation of powers, I hope the Korean government makes sure that the judicial branch can respect state immunity, an international rule.


What direction to do you think Seoul-Tokyo relations should head in the post-coronavirus era?
South Korea and Japan, along with the United States, need to become proper partners sharing various tasks including security assurances. South Korea and Japan, as countries representing democracy and capitalism in Asia, are countries that can also jointly assist each other diplomatically. It is very regrettable that coordinating such diplomatic assistance has become difficult because of the deterioration of Korea-Japan relations. Foreign Minister Kang has said to me, “Let us help each other in attaining seats in international organizations.” Japan will support Korean personnel, and Korea will support Japanese candidates in elections in international organizations, but it is becoming more and more difficult to help each other. Korea and Japan are actually countries that are the closest neighbors and can become partners that are on the same wavelength. Amid uncertainties in U.S.-China relations, it is very important for Korea and Japan to keep in step with each other, and cooperate not only in security assurances but also free trade and science and technology.