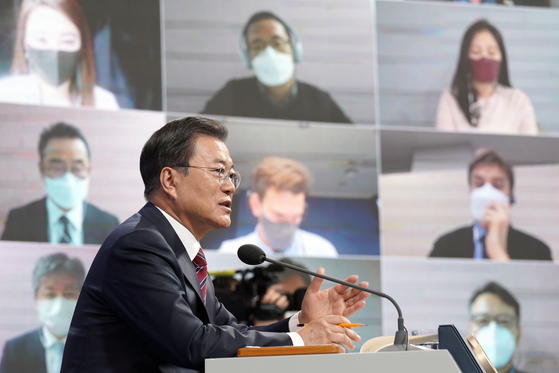 President Moon Jae-in answers a question at a New Year's press conference at the Blue House on Monday. Twenty journalists attended in person and 100 via videoconference. [YONHAP]

“It is extremely unfortunate that my two predecessors are both in prison,” Moon said in a New Year’s press conference Monday morning. “They are both aged and their health conditions are poor, so I am very worried about them. But I do not think the time is right to talk about granting pardons. Their trials have just ended.”

Ousted President Park Geun-hye's convictions for abuse of power, taking bribes and misappropriating funds from the country's spy agency were upheld by the Supreme Court last week, along with a 20-year prison sentence. Her predecessor Lee Myung-bak is also in jail after the Supreme Court upheld a 17-year sentence for embezzlement and taking bribes last October.

At the press conference, an annual tradition for Korean presidents, the first question was about Moon's willingness to pardon Lee and Park. Admitting that he expected the question, Moon made clear it won’t happen anytime soon.

“They were found guilty of abuse of power and corruption, and the country suffered enormous damage due to their crimes,” Moon said. “The people were also severely disappointed. The court handed down heavy sentences, taking into account the graveness of their crimes. Although I am the president, I have no right to talk about granting pardons to them as soon as their trials are over.”

Moon put an end to speculation in the political arena that he would soon grant pardons to Lee and Park, presumably before upcoming mayoral by-elections in Seoul and Busan.

Lee Nak-yon, chairman of the ruling Democratic Party (DP), said earlier this month that he would propose pardons to Moon for the sake of national unity. Political analysts said the move was intended to win conservative votes ahead of the by-elections in April.

Moon left open the possibility that he will consider granting pardons to Lee and Park later.

“An appropriate time will come someday for me to think more seriously,” Moon said. “But the grand precondition is the people’s consensus. Unless the people agree with it, granting special pardons will not bring about national unity. If there is disagreement, it will actually hurt national unity.”

Moon also talked about months of confrontation between Prosecutor General Yoon Seok-youl and his administration and apologized to the public for it.

But he said the conflict between outgoing Justice Minister Choo Mi-ae and Yoon was nothing extraordinary. “Because the tenure of the prosecutor general is guaranteed, the prosecution is guaranteed its political neutrality, and the Ministry of Justice was separated from the prosecution to encourage its reform,” Moon said. “Even if we see some conflicts, I don’t think it is anything special in a democratic country."

Moon said he didn’t think Yoon is only interested in a future in politics. “There are various assessments about Yoon, but my evaluation is that he is the prosecutor general of the Moon Jae-in administration,” Moon said. “I don’t think he is currently serving the post with a plan to become a politician.”

Yoon has faced criticism from the ruling DP for sanctioning a series of politically sensitive investigations starting with a probe into former Justice Minister Cho Kuk and his family’s alleged academic and financial wrongdoings. He recently faced renewed criticism for pushing an investigation into the Moon government’s decision to shut the country’s second oldest nuclear reactor.

Yoon has made it to the top of polls asking people to name their favorite potential presidential candidates, beating ruling party contenders. While the media often treats Yoon as an opposition contender, acting Chairman Kim Chong-in of the main opposition People Power Party said last week, “He is still a member of the administration. If [the ruling party] cannot find a suitable candidate, he may be selected.”

At the press conference, attended by 20 reporters at the Blue House and another 100 through videoconference links, Moon said he does not think the Board of Audit and Inspection and the prosecution have political intentions in their investigation of the early shutdown of the Wolsong-1 nuclear reactor.

Moon broke his silence on the subject of Seoul Mayor Park Won-soon, who committed suicide over a sexual molestation accusation in July.

Moon rejected the idea that the ruling party is abandoning a promise not to field a candidate in a by-election if the vacancy is created because of wrongdoing by the holder of the office who is the party member. A clause making that promise was introduced in the party’s constitution in 2015 when Moon was the chairman.

Although both mayor posts in Seoul and Busan were left vacant due to scandals — Park’s suicide and Oh Keo-don’s resignation over alleged sexual harassment  — the DP decided to field candidates and changed its constitution. Both Park and Oh were DP members.