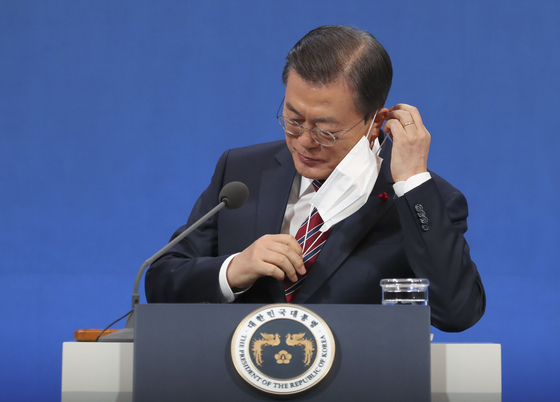 President Moon Jae-in taking off his mask at the start of the press conference hosted on Monday at the Blue House. A limited number of reporters were present at the conference, with many joining it virtually over coronavirus concerns. [JOINT PRESS CORPS OF THE BLUE HOUSE]

President Moon Jae-in weighed in on the tragic death of an adopted toddler who was battered — but went too far for many.

“Children are not commodities to be traded,” wrote a citizen on the Blue House website on Monday, just hours after Moon’s comments at an annual New Year's press conference. “You can’t adopt a child and try it on like you’re trying on goods, and then ask for a refund if you don’t like it [...] What the president said during the press conference was appalling.”

Moon was hosting a two-hour press conference at the Blue House on Monday morning when the topic turned to the October death of Jeong-in, a 16-month-old toddler who allegedly suffered abuse from her adoptive mother.

“It is heartbreaking to hear of the deaths of young children abused at home, and I agree that the country has to address the issue full on,” Moon said in response to a question. “We have to come up with a system that will be able to detect earlier on signs that the children are being abused at home, and then separate the children from their parents once these signs are detected.”

So far so good. But then he went too far for some.

“There should be thorough research beforehand to find out if the parents are fit to adopt children [...] and even after the adoption, the family should be checked on to see if the adoption is working out,” Moon said. “If it is not, then there should be measures to cancel the adoption [...] If the problem is that the parents don’t get along with the children, then they should be able to find ways to make it work, such as changing the adopted child.”

“I couldn’t believe that those were words from a president who was formerly a human rights lawyer,” said Kim Eun-hye, the spokesperson for the opposition People Power Party, in a statement on Monday. “There was no sign of respect for human rights and human dignity in what he said.”

Yoo Seong-min, a former four-term conservative lawmaker, criticized Moon for focusing on the wrong part of the issue.

“The issue at the core of the incident [on Jeong-in’s death] is child abuse, not adoption,” Yoo wrote on Facebook Monday. “Doesn’t the president know that most child abuse in homes is committed by biological parents?”

Jeong-in died on Oct. 13, 2020, at a hospital in Mok-dong in western Seoul, 271 days after her adoption. Her body was bruised, many bones were fractured and her pancreas was ruptured. A hospital worker reported suspected child abuse to the police following her death and her adoptive mother was arrested in November. Indicted for murder, the mother’s next hearing at the court is on Feb. 17.

The Blue House said Moon's comments should be taken in context.

“The president was speaking whilst thinking of expanding policies on foster care, to have the to-be adoptive parents get to know the child at their foster home first, for a few months, before they decide on an adoption,” Kang Min-seok, presidential spokesperson, told the press after the conference.

“These are practices quite common in other parts of the world like France, Sweden and Britain,” he added. “Korea has been running similar programs, but they haven’t been institutionalized yet [...] What the president was trying to emphasize was that the happiness of the child should be the foremost concern in adoption.”

Since the days of the Korean War (1950-1953) until the early 2010s, Korea was one of the world’s top five nations putting children up for adoption. According to records at the Ministry of Health and Welfare, nearly 170,000 Korean children were adopted overseas from 1958 to 2015.