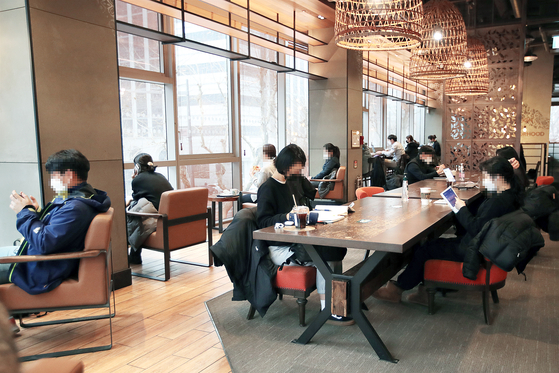 Customers sit in a coffee shop in downtown Seoul Monday as coffee shops were allowed to let people eat and drink inside again. [JANG JIN-YOUNG]

President Moon Jae-in on Monday reassured the public about the safety of Covid-19 vaccines, saying the Korean government would take full responsibility for any serious side effects that may occur.

“All vaccines have some side effects,” Moon told Blue House correspondents at a New Year’s press conference. “They could be very light pains or more serious side effects.”

In case people experience severe side effects after they get vaccinated, the Korean government will “fully take responsibility” and offer “sufficient compensation,” Moon continued.

“People don’t have to worry at all about suffering injuries and not getting any help from the government,” he stressed.

The country detected 580 cases last Friday and 520 on Saturday. Daily infections have mostly been falling since they peaked at an all-time high of 1,240 on Christmas Eve.

Health authorities, however, warned against complacency, saying Sunday’s drop was partly the result of fewer Covid-19 tests administered over the weekend. 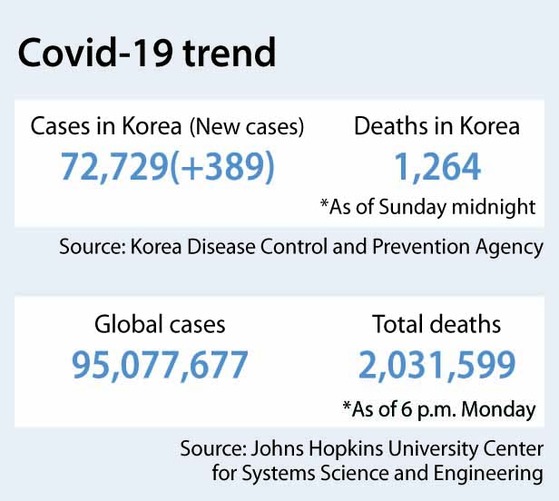 Fewer people show up at testing sites on weekends because private medical facilities that offer Covid-19 testing usually close on Saturday afternoons and on Sundays, leaving only public facilities running.

With just weeks left before the first batch of Covid-19 vaccines arrive in Korea, Moon said in Monday’s press briefing that he believes people won’t be afraid to get vaccinated, unlike some media reports that suggest otherwise.

Moon said he wouldn’t cross out the option of being the first person in Korea to get inoculated as a way to set an example.

The first batch of vaccines could arrive from the Covax Facility, a global Covid-19 vaccine allocation plan, Moon mentioned, contrasting previous statements from the KDCA that doses from AstraZeneca were expected to be the first to arrive.

In the same breath, however, Moon refrained from making any clear-cut statements, saying everything was “a possibility” at this point.

“Details will [later] be revealed by health authorities,” he said.

“Our plan is to start inoculations in February and wrap up the first round [of vaccinations] by September,” Moon said, adding he thinks herd immunity will “mostly” have been formed in society by then. Health authorities previously said they planned to achieve herd immunity by November.

On reports about some people in foreign countries dying after getting vaccine shots, Prime Minister Chung Sye-kyun called on the Ministry of Foreign Affairs Monday to collect information from foreign nations that began their vaccine rollouts, and share it with other Korean ministries.

Of 389 people who were diagnosed with the coronavirus Sunday, 366 were due to domestic transmission, KDCA data showed.

All of Korea’s 17 major cities and provinces saw new cases.

The remaining 23 cases were imported: six from the United States, three from Indonesia, two each from Myanmar and the United Arab Emirates and one each from the Philippines, Russia, Sri Lanka, Japan, Cambodia, France, the Netherlands, Mexico, Ecuador and Sudan.

Fifteen patients died, raising total deaths to 1,264, while 470 patients recovered, bringing total recoveries to 58,723. As of Sunday at midnight, Korea had counted 72,729 Covid-19 patients in all.

Starting Monday, people in the Seoul metropolitan area — Seoul, Incheon and Gyeonggi — were allowed to eat and drink in coffee shops and go to gyms as eased social distancing measures went into effect. Gyms, however, have to close from 9 p.m. and 5 a.m., and cafes can only allow people to drink inside up to 9 p.m.

Many coffee shops across Seoul were bustling with customers Monday, including a Hollys cafe in Yeouido, western Seoul. Kim Hyun-soo, an analyst at a local securities firm, said it was great to be back with his colleagues.

“My coworkers and I used to come down here every morning for a chat after our meeting,” said Kim, who was with three others and said he was planning to stay for about half an hour. Health authorities strongly advise people who go to cafes with others to stay less than an hour.

“It was sad for a while we couldn’t come and sit down, but I’m glad now that we can,” said Kim.

Noraebang (singing room) and hagwon (private cram school) reopened as well Monday, but could accept only one customer for every eight square meters (86 square feet) of space. Clubs and bars that involve table-hopping still remain closed.