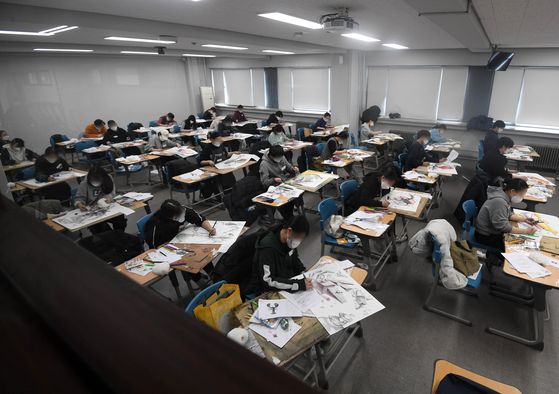 Nearly one out of 10 universities in Korea are struggling to fill their freshman class this year, the JoongAng Ilbo found in a recent survey.

The survey excluded 10 universities that did not disclose competition ratios and five universities specializing in science and technology, including Kaist in Daejeon and Pohang University of Science and Technology in North Gyeongsang.

Of the 18 universities with competition ratios of less than one, 11 were located in the Yeongnam and Honam regions, which include North and South Gyeongsang, Busan, Daegu, Ulsan, Gwangju and North and South Jeolla.

“The rate at which these universities are losing new applicants is quite unprecedented. I don’t think you'd be able to find other examples abroad,” said Bae Sang-hoon, a professor of education at Sungkyunkwan University. “Universities across the country need to come up with innovative ways to run themselves. They have to change the target audience from students to people in the workforce, and change the curriculum to be geared toward foreigners, employees and retirees.”

Korea recorded the world’s lowest fertility rate of 0.92 in 2019. A fertility rate measures the average number of children a woman has in her lifetime. The country also marked its first-ever decline in its registered population at the end of 2020, according to the Ministry of the Interior and Safety. 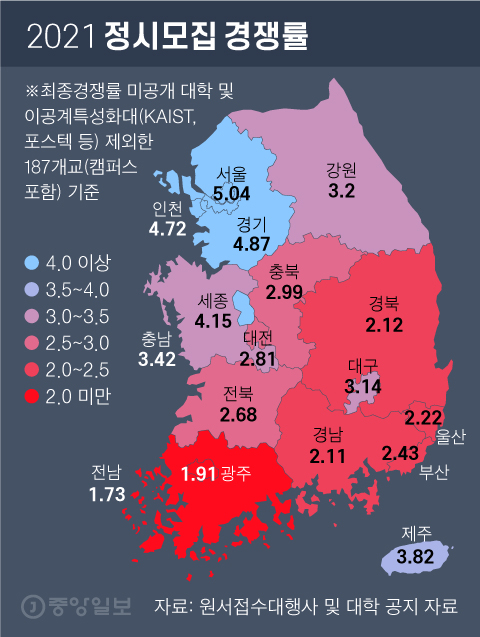 The competition ratio at universities across Korea in their regular admissions season in 2021, surveyed by the JoongAng Ilbo. [CHA HONG-JUNE]


In looking at the universities in the Yeongnam and Honam regions, the JoongAng Ilbo found that out of 68 universities, 53 had competition ratios of less than three for regular admissions this year.

Given that each student can apply to up to three universities in the regular application season, having a competition ratio of less than three can leave these universities with unfilled seats.

That means that nearly eight out of 10 universities in the southern areas will likely have less than full freshmen classes this year.

“The 'in-Seoul' universities are monopolizing the market,” said Park Nam-gi, a professor of education at Gwangju National University of Education. “These universities have to help out, by either accepting lower numbers of students, or developing themselves into more research-focused institutions with higher tuitions and share the student population with the rest of the universities.”