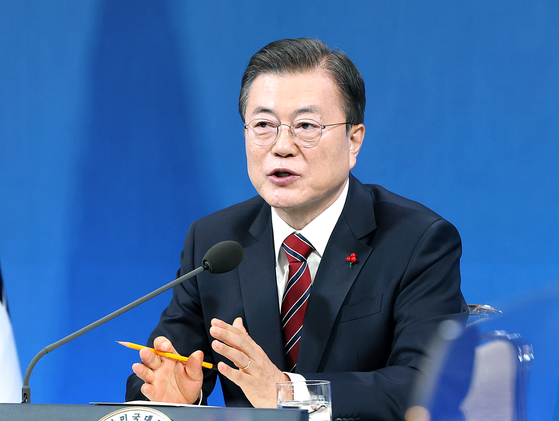 Pie in the sky has collided with corporate Korea, and the letter of the law, as President Moon Jae-in indicates he is in favor of the profit-sharing concept, in which private companies are compelled to distribute some of their profits to workers, subcontractors and partner companies.

On Monday, Moon endorsed the concept, saying the government’s finances are insufficient to prevent the polarization of wealth. DP Chairman Lee Nak-yon last Wednesday broached the topic during a meeting with top aides, adding that a task force was formed.

“The government cannot enforce [the profit-sharing policy] by institutionalizing it,” said Moon. “I think it would be ideal if the private sector voluntarily participates in the plan, and the government gives incentives.”

The profit-sharing concept, which is still a work in progress, calls for companies to distribute earnings to employees and others based on certain benchmarks of performance. For manufacturers, gains from the sale of items could be distributed to those who helped with the development. Internet companies could pay bonuses linked to traffic, while others might pay workers and suppliers a percentage of profits.

Rep. Hong Ik-pyo, the DP's head of policy, echoed Moon's view on Tuesday, saying the policy is not compulsory. He emphasized it will be pushed with incentives from the government, such as tax benefits. In response to the concerns that the government will institutionalize the initiative, Hong said the legalization will only be for the tax benefits, not for enforcement of the policy.

The business community is expressing concern. The plan targets companies that are considered beneficiaries of the coronavirus pandemic, such as delivery apps, but business leaders say not only is it difficult to assess the exact size of the company’s profit from the pandemic, there is also a danger that executives could be accused of breach of duty, since the distribution of profit could go against the interests of shareholders.

On the day of Moon’s statement, the administration and the ruling party had already formed a task force regarding economic inequality and identified the companies that will be asked to participate in the plan. Within the ruling party, major semiconductor and home appliances firms and IT companies, such as Kakao and Baedal Minjok, card companies and financial corporations have been considered as beneficiaries of the coronavirus pandemic.

Businesses claimed it is virtually impossible to assess the exact proportion of profit that can be traced to the pandemic.

Some voices express concerns for the profit-sharing policy’s potential infringement on property rights of shareholders.

The policy could violate the interests of shareholders if part of the profit, which must be allocated as dividends, is shared with other companies.

“Fundamentally, business leaders have the obligation to share their profits with shareholders,” said Choi Jun-sun, an honorary professor at Sungkyunkwan University Law School. “The company could face consequences for dereliction of duty if it voluntarily distributes the profit elsewhere.”

The Ministry of SMEs and Startups proposed plans to implement the policy in November 2018, but failed to institutionalize it due to the backlash from financial companies.

To back the profit-sharing initiative, Moon mentioned a 2017 policy that encourages some public and private companies to provide funds to those involved in farming and fisheries affected by the FTA signed between Korea and China in 2015.

The fund has been run by Korea Foundation for Cooperation of Large & Small Businesses, Rural Affairs with an annual goal of 100 billion won ($90.8 million). Moon said the fund was created so that companies that benefited from the FTA, including manufacturing firms, could support farming and fishing villages that faced losses from the deal.

The fund was going to be used for subsidizing tuition for children of workers in the farming and fishing industries and the distribution and sales of agricultural and marine products. In order to encourage donations from companies, the government created a range of incentives, such as corporate tax deductions.

Business community professionals said the fund was a failure.

Although the fund’s goal was to raise 100 billion won per year, the reality after four years is far from the ideal.

According to the Korea Foundation for Cooperation of Large & Small Businesses, Rural Affairs website, the amount raised as of Jan. 18 since 2017 was 116.4 billion won, falling short of the goal of over 400 billion won.

The fund was initially intended to attract capital from the private sector, but public companies accounted for 73 percent, or 85.3 billion won. Major private companies raised 19.7 billion won, or 17 percent.

“During the initial stages of the fund, it seemed like the government was invested in the fund, but as time passed, it looked like even the government lost its motivation,” said an employee at a major local firm. “Public companies that are subject to the government’s evaluations were the only ones left contributing.”

Supporters say that the solution proposed makes a lot of sense.

“Small- and medium-sized businesses have continuously vouched for the profit-sharing policy over the years,” said Bae Jae-hong, the director of a local organization for small- and medium-sized distribution companies. “The profit structure is heavily biased toward major firms, so the profit inevitably dwindles as it reaches subcontractors. Because of the coronavirus pandemic, the liquidity in the market has shrunk even further.”