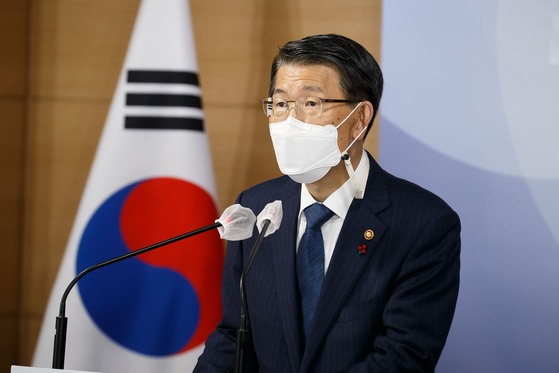 
Financial Services Commission (FSC) Chairman Eun Sung-soo said that no decision has been made about short selling and that the probation on it may not end March 15, despite an earlier text from the commission suggesting that the practice would be allowed again from March 16.

"Please wait until al final decision is made," Eun said during a briefing held Monday in the Central Government Complex in Seoul to announce the commission's policy goals for 2021. "Assertive media reports saying the government decided to resume short selling or to delay lifting the ban on short selling could bring big confusion to the market."

Last week, the FSC notified reporters by text message that the short-selling ban is set to expire on March 15. The commission now says that this was simply detailing the original schedule.

“The temporary ban imposed on short selling due to the coronavirus pandemic is due to expire on March 15,” read the text sent by the press office. “Financial authorities will improve short-selling policies, such as strengthening penalties on illegal short selling, improving guidelines related to market makers and making short selling more accessible to retail investors with the goal of resuming short selling from March.”

Retail investors argue the ban should remain in place to level the playing field between them and foreign and institutional investors, and the ruling party is siding with them ahead of the April by-elections for the mayoralties of Seoul and Busan.

"Decisions related to short selling should be made by an FSC meeting of nine members," Eun said. "Please understand I can't give thorough answers on this matter."

The chairman and vice chairman of the FSC, the vice minister of economy and finance, the chief of the Financial Supervisory Service, the chairman of the Korea Deposit Insurance Corporation and the senior deputy governor of the Bank of Korea are inlucded in the nine members.

On whether the FSC is discussing short selling with the ruling party, Eun said "lawmakers can talk about it when the regular session of the National Assembly begins in February, but the FSC won't be pitching ideas or discussing with [them]. It will most likely be us listening to the [ideas] of the lawmakers."

Due to the alleged unfairness of short selling, the FSC emphasized in its policy briefing plans to improve the current short-selling system. It said it will announce measures to increase availability of stock for borrowing by retail investors by the first half of this year.

Retail investors have had difficulty borrowing stock in the first place, as the lenders of securities make little available to them. The punters lack the funding to back their borrowing, compared to foreign and institutional investors.

FSC also plans to cut down short selling by market makers by half and shorten the inspection period for naked short selling — short selling without borrowing stock, which is illegal in Korea — from six months to one month.

"Nobody should ever even consider illegal short selling," Eun said.

While the FSC has been offering financial aid to companies and small-business operators hit by the coronavirus pandemic, it plans to take gradual steps to end the aid, though the extension of debt maturity due to expire in March is likely to be continued.

"Considering the current Covid-19 situation, the real economy and capacity of the financial sector to [withstand debt maturity extension], pushing back on deadlines seems inevitable," the FSC chief said.

FSC will confirm whether it will give another extended deadline next month after consulting with banks and financial companies.

As household debt continues to snowball, FSC will also announce measures to curb household debt in the first quarter of the year. The major change will be imposing tighter standards on loan programs so those with repayment capacity can borrow money.

For young people with insufficient funds to purchase houses, Eun said he is considering mortgages with 30-year and 40-year maturities.