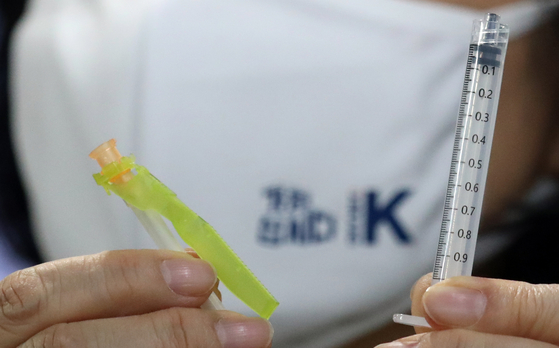 
Poonglim Pharmatech has completed construction of production facilities to manufacture more than 10 million syringes a month that can improve the efficiency of Covid-19 vaccinations by 20 percent, the Ministry of SMEs and Startups said Tuesday.

The mid-sized medical equipment maker will roll out its products at full capacity from February. The company was introduced as an example of an exemplary Korean SME in a Tuesday briefing.

What’s notable about Poonglim Pharmatech’s latest product is that the design reduces dead space inside the syringe, allowing for a bottle of vaccine to go further.

Last year, the company succeeding in developing “low dead space [LDS]” syringes which are designed to reduce the dead space between the needle and the body of the syringe.

Due to such structural limitations, a typical syringe would have to contain 0.4 milliliters of vaccine in order to inject a person with 0.3 milliliters, as 0.1 milliliters remains trapped in the dead space and has to be thrown out with the syringe.

Because low dead space syringes do not have such structural limitations, a 2.25 milliliter bottle of vaccine could be given to six patients, the company said, while it can only be given to five patients using conventional syringes.

LDS syringes are not completely new to the medical equipment market, but Poonglim’s LDS syringes are different as they come with safety features including a luer lock, which is a small, twisting lock between the syringe’s body and needle to prevent leaks.

“There aren’t many companies out there that can mass produce LDS syringes with a luer lock,” said Cho Mi-heui, Poonglim Pharmatech’s vice president. “Before the pandemic, LSD syringes were mostly sold overseas for vaccines that are either expensive or require an accurate dosage. Covid-19 vaccines created new demand.”

Poonglim has patented this technology in Korea and is looking to obtain international rights for the intellectual property in the United States and Europe.

The product was authorized for domestic use by the Ministry of Food and Drug Safety last month.

“Using Poonglim’s LDS syringes alone has the equivalent effect of securing 20 percent more vaccines [than what we actually have],” said Park Jong-hak, an SME Ministry official in a Tuesday briefing. “We would be injecting vaccines to 120 million people which would have been 100 million using conventional syringes.”

Poonglim’s initial plan was to establish production capacity for 4 million units per month. The figure was boosted to 10 million after Samsung Electronics provided some support. Through the Ministry of SMEs and Startups’ support program, the electronics giant shared its high-precision molding technology and assistance in setting up equipment for automatic assembly.

The ministry has been supporting “smart factory” upgrades for mid-sized companies in quarantine-related fields, such as face masks and test kits.

“We’re currently pushing efforts to expand smart factory practices in other syringe producers as well,” it said in a statement.

Poonglim’s achievement can be seen as one of the many preparations Korea is going through to speed up inoculation once coronavirus vaccines arrive in Korea next month, probably with British bio firm AstraZeneca’s vaccines.

On Monday, the government announced that it would create an online system where people can make appointments to receive vaccinations and get certificates to prove their inoculation. According to the Ministry of the Interior and Safety, Tuesday, more than 4,000 medical institutions have been designated so far to offer Covid-19 vaccinations nationwide.