Trucks carrying LED screen panels were rented out by users of mobile game Fate/Grand Order to complain about publisher Netmarble's inability to fulfill its promise last year to carry out a New Year's event for all users. Users collected donations to pay for the five-day rental of three trucks. The message on the first truck reads "Where did the promise you made in July 2020 go? Managers must explain." [SCREEN CAPTURE]


Consumer behavior has evolved with time and so has the art of protesting against companies. Recently, the game and entertainment industries, two fields where consumers’ voices echo the strongest and loudest, became acquainted with the latest form of protest from its consumers — LED trucks.

Last week in front of game publisher Netmarble were three trucks driving around with LED screen panels, displaying complaints of angry users who demanded a proper apology and measures to be taken against the publisher for having gone against their wishes and not carrying out a New Year’s event for the Korean version of Japanese mobile game Fate/Grand Order.

Last year, Netmarble promised roughly 200,000 won ($181) worth of certain in-app purchases free of charge to both existing and new users so long as they log into the game during the two weeks starting from Jan. 1.

In other countries where the game is also being serviced, only newcomers were eligible for the giveaway, which Netmarble held for all users every New Year since Netmarble started servicing the game in 2017.

Then on Jan. 4, Netmarble suddenly paused the event, citing “internal affairs.” Players assumed that the halt may have been as a result of the response from Japanese users, who actively took to Twitter to express their envy of Korean users. Two days later, Netmarble came forward with its first apology but failed to address the reason for halting the reward event in detail. This led to a collective action from users to lower the games' review score on the App Store, resulting in today's average score of 1.1 out of a possible five. 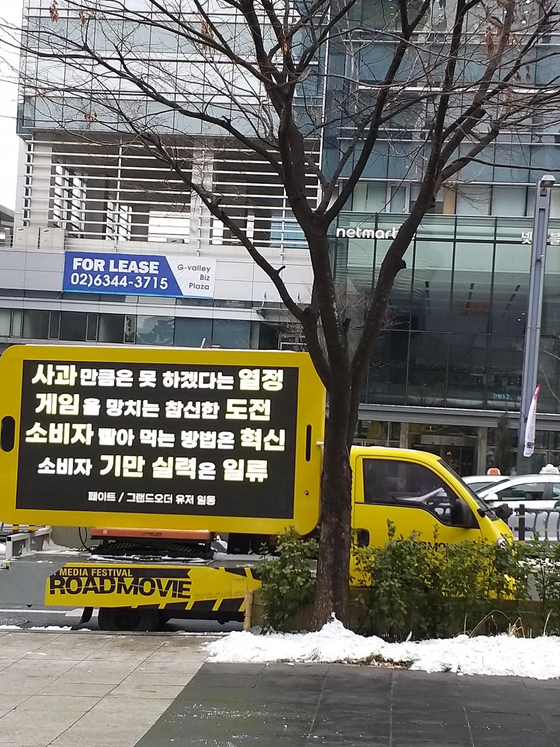 Trucks carrying LED screen panels with messages were rented out by users of mobile game Fate/Grand Order to complain about publisher Netmarble's inability to fulfill its promise last year to carry out a New Year's event for all users. The message reads "The passion for not apologizing, the challenge of ruining a game, the innovation of robbing users' money, the best in fooling the consumers." [SCREEN CAPTURE]


Netmarble apologized for the second time on Jan. 8, but it didn’t stop users from raising funds to rent out LED panel trucks to express their dismay. Users of the Fate/Grand Order subcategory on online forum DC Inside sent money to the bank account of a user who volunteered to gather the funds and use the money to set up a truck protest. The user gathered over 10 million won within mere minutes from 517 people and returned 1.5 million won so as not to avoid the law that says an individual must make a formal report and write out receipts for a fund of over 10 million won.

On Jan. 16, a second round of fundraising began through the same website, this time by a different user. Three hours later, they posted a notice on the website that they had collected 9.5 million won to rent out three trucks for five days. The trucks drive around the building and neighborhood and make occasional stops where it's legal, making sure they do not violate any rules along the way.

“We demand a detailed reason of what happened and who was responsible, as well as follow-up measures to make sure that the same thing will not happen again,” the protestors said in an official statement. “We demand the company compensate us for the rightful rewards, which were unfairly withdrawn. We demand that the head of the Korean server operator Park Young-jae take responsibility and bring forward a full apology signed with his own name, or the names of other heads of relevant departments.”

Netmarble explained that since the first complaint, the company has come up with six apology statements so far with the latest on Sunday, which included the promise of a user-company conference session to take place in February. Head of server Park also uploaded a statement on the game’s official user cafe on Naver on Sunday officially announcing his resignation. The game event has also been renewed. 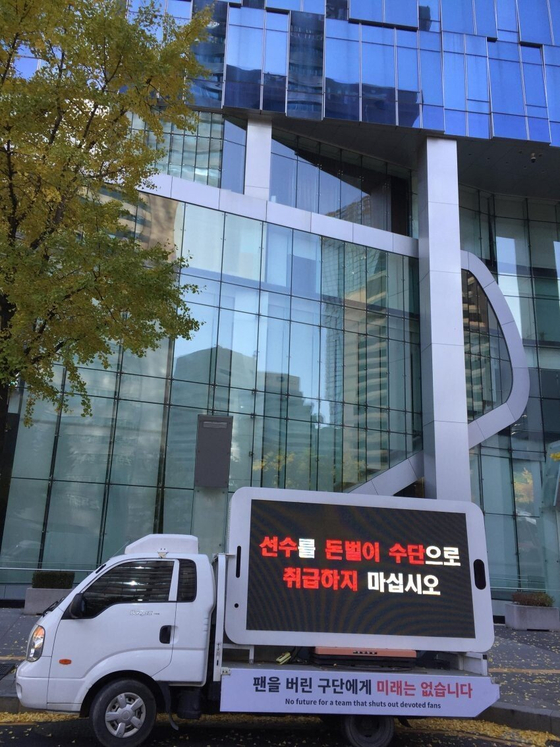 Protest trucks rented out by fans of video game League of Legends' Esports team SKT T1 in November last year marked the first truck protest by game players. The message reads "Do not treat the players as your money-getters." [SCREEN CAPTURE] 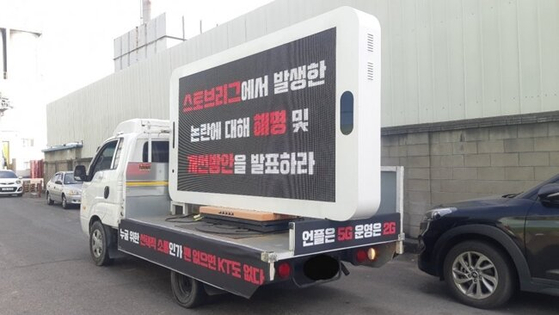 Protest trucks rented out by fans of video game League of Legends' Esports team KT Rolster in November last year. The message reads "Explain the details and the measures you will take on what happened in the Stove League." [SCREEN CAPTURE]


This is the first time that users of a specific game have employed the use of a truck to voice their complaints, but not a first in the gaming industry. Fans of Esports team SKT T1 and KT Rolster of famed video game League of Legends have each rented out trucks to call out the teams’ operators on how the teams were run, both in November and December last year.

“Protestors have always used trucks in their gatherings,” said the company that lent the trucks for the Netmarble protest. “But the use of video trucks [trucks with LED Panels] goes back to about a year ago in tandem with the coronavirus. Fans had a message to deliver to the entertainment companies but they found it was safer and more convenient to send trucks to do the job — because the trucks only drive around, which means no one has to file for protests to the police or be there in cold weather.”

In fact, in the field of K-pop, using trucks to chariot around enemy castles has been a tactic employed by many fandoms since 2019. On Dec. 16, 2019, fans of girl group Blackpink rented out trucks to drive around the company estates of the band’s agency YG Entertainment to demand that it let Blackpink appear on more Korean TV shows and make each member debut with their own solo songs.

Since then, fandoms have readily taken siege of company buildings with their LED horsemen, including when fans of project boy band X1 from the fourth season of cable channel Mnet’s “Produce 101” audition franchise camped outside of CJ ENM’s headquarters in western Seoul along with trucks in January last year, to when people critical of boy band member Chen demanded that he quit the group after announcing his soon to come wedding and child. Supporters of Chen’s also used the same tactic to demand that his agency SM Entertainment protect him from outside forces. 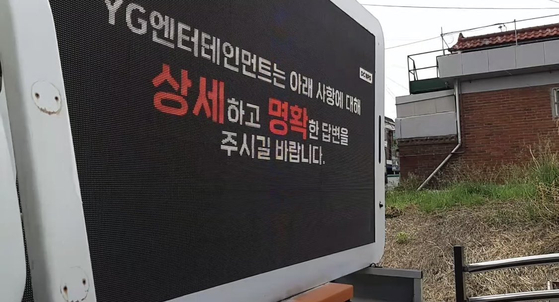 Trucks used by fans of girl group Blackpink to demand that its agency YG Entertainments lets the group participate in more Korean TV shows in December 2019. The message reads "YG Entertainment must give a clear and detailed answer to the questions we have." [SCREEN CAPTURE] 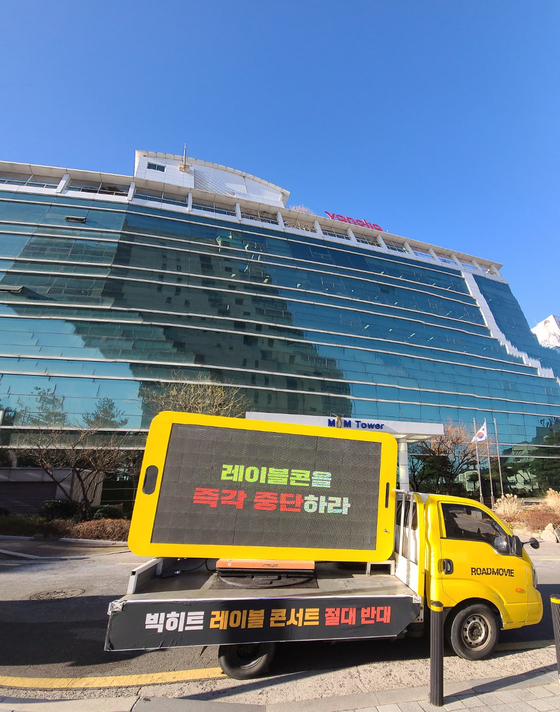 Trucks were used by people opposing an all-hands-on-deck concert by Big Hit Entertainment that took place on Dec. 31, 2020 where bands from all of Big Hit Entertainment's recently-acquired labels took part. The message reads, "Stop the label concert at once." [SCREEN CAPTURE]


“Having trucks drive around definitely has an impact on us on many levels,” said an insider of a company who witnessed an LED truck protest last year. “People near our company who didn’t exactly know what was going on became aware and even our own staff — or worse, people higher up — asked the related teams what’s going on. If the CEO or others become aware, then it gets serious for us.”

In late 2019, Prof. Kim Rando, who teaches consumer sciences at Seoul National University, chose “fansumers" as one of the top 10 trend keywords of 2020. The word can be defined as consumers who actively take part in the production of merchandise. Active participation takes many forms, such as directly taking their dismay to the company or telling their close friends about it. They could get outside parties, such as the Korea Consumer Agency, involved as well, but the ultimate form of consumer participation comes when consumers spread the news to people totally unrelated to the issue through various means — such as protests with LED trucks.

“Companies take utmost care to show the best version and image of themselves, so when consumers get people unrelated to the issue involved, it damages the companies a lot,” said Kim Si-wuel, professor of consumer information science at Konkuk University. “LED trucks are a result of such consumer tactics, added with the weather, the coronavirus and the latest technology altogether. It also means people’s online voices have become offline, real and tangible outcomes — another step in their patterns.”