Korea and Chile among nations preparing for COP 26

Korea and Chile among nations preparing for COP 26 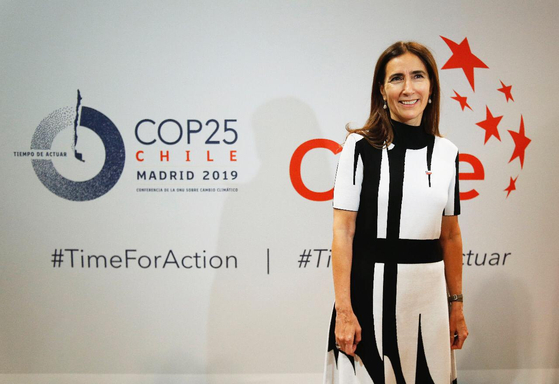 Conservation of marine ecosystems go hand in hand with climate change actions, said Chilean Environment Minister Carolina Schmidt at a forum hosted by the Global Green Growth Institute and the Chilean Embassy in Korea on Tuesday.

“Undoubtedly, the ocean is a priority for Chile, especially due to its fundamental role as a global climate regulator,” Schmidt said in a video message at the forum. “The ocean takes up almost 30 percent of all CO2 emitted and 90 percent of the additional heat caused by the climate change. The ocean and its ecosystems are suffering [...] We are convinced that climate change and biodiversity laws are absolutely interlinked and must be addressed jointly.”

The forum was held virtually in the lead up to the 26th United Nations (UN) Climate Change Conference of the Parties (COP 26), scheduled in Glasgow from Nov. 1 to 12. Chile was the president of COP 25 in 2019. Originally scheduled in 2020, COP 26 was postponed a year due to the Covid-19 pandemic.

Experts highlighted one of the reasons the forum may be especially followed by leaders around the world.

“Starting off the year 2021, this very week the incoming U.S. administration is expected to embark on a major U-turn from the path of the preceding four years and place high priority on climate issues,” said Ban Ki-moon, former secretary-general of the UN and president and chair of GGGI.

U.S. President-elect Joe Biden had vowed to sign the United States back into the Paris climate agreement from day one in office. President Donald Trump withdrew the country in 2020.

The Paris agreement was born in 2015 when 196 parties agreed to work on drastically lowering their greenhouse gas emissions to limit global warming to below 2 degrees Celsius (3.6 degrees Fahrenheit) compared to pre-industrial levels. The agreement works in five-year cycles, with national goals put forward by each party, also known as nationally determined contributions (NDCs).

“NDCs need to be ambitious in the degree of committed efforts, but we also need to make sure that NDCs incorporate all the right elements and that key elements—such as oceans, wetlands and biodiversity—are not left out,” Ban said. “I know the Government of Chile already delivered an update of its enhanced NDCs last year and became the first from the region to do so.”

A total of 45 parties including the European Union, Chile and Korea, updated their NDCs by the end of 2020, meeting the deadline set by the Paris agreement. Chilean NDCs highlight climate change adaptation and mitigation efforts including those concerning the ocean and communities with livelihoods tied closely with the marine ecosystems.

“When we have global problems, we need global solutions — that means everyone in the national capacity needs to develop strategies to fight climate change,” said Gloria Cid, ambassador of Chile to Korea. “2021 is a critical year [...] The importance lies in continuing to create awareness [on the issue] and participation from every actor in the government, private sector and the public.”

Korea’s updated NDCs include reducing its total greenhouse gas emissions by 24.4 percent of the level in 2017, which was 709.1 million metric tonnes of carbon dioxide equivalents, by 2030. It said that it will make another update on the target before 2025, to ensure that the country reaches carbon neutrality by 2050.

The nation is looking to host the P4G Summit from May 30 to 31. It was postponed from June last year over coronavirus concerns.

“The summit is a complementary initiative to support the Paris agreement, with the participation of private sectors,” said Chung Kee-yong, director-general of climate change, energy, environment and scientific affairs at the Ministry of Foreign Affairs of Korea during the forum. “As 2021 begins as the year of action to achieve the Paris agreement targets, we plan to make the P4G Summit a stepping stone toward the COP 26.”

The forum was also joined by experts on climate change and climate action from GGGI and the Green Climate Fund.

Joining the green routes at sea