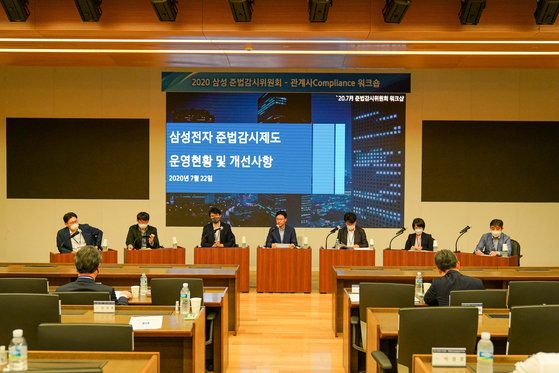 In this file photo, the compliance committee of Samsung Group holds a workshop meeting for the conglomerate's executives on July 22, 2020. [JoongAng Photo]


Experts are split over what the jail sentencing of Samsung Group leader Lee Jae-yong means about the conglomerate’s effort to clean up its governance — as demanded by a judge in 2019.

In a retrial ordered by the Supreme Court in 2019, the Seoul High Court on Monday found Lee guilty of giving bribes worth 8.6 billion won ($7.8 million) to former president Park Geun-hye through her friend Choi Soon-sil for political favors. The court sentenced him to two and a half years in prison, making clear in its ruling that Samsung’s compliance monitoring committee, launched in February 2020 during the retrial, was not effective enough to warrant leniency in the sentence. 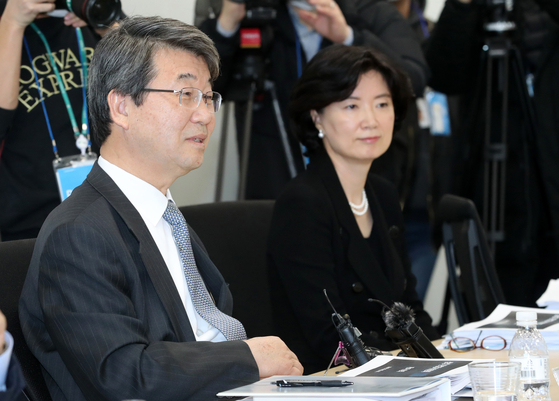 The panel was established after one of the three judges overseeing Lee's retrial demanded in October 2019 that Samsung develop an internal system to assure that the group and its leaders follow laws, regulations and business ethics. Judge Jeong Jun-yeong specifically made the order during the first session of the retrial.

At Monday’s final hearing in the retrial, Jeong said his demand for an internal compliance system intended to prevent illegal actions from being committed within the conglomerate and that its effectiveness must be meticulously examined. Three professional reviewers, appointed by the court, Samsung and the independent counsel team that prosecuted Lee, conducted an assessment and submitted a report ahead of the final hearing.

Based on the report, Jeong concluded that Lee had made serious efforts to improve the internal compliance system. But he said the new system was not satisfactory enough, because it failed to effectively prevent new types of risks.

Jeong also expressed concerns that the system does not have specific measures to oversee the central decision-making body of the conglomerate, such as the now dismantled Future Strategy Office. He also said risks still remain that Samsung may use fake internal contracts to raise money to bribe politicians.

“Although Lee and Samsung’s sincere efforts are positive, the new internal compliance system failed to satisfy expectations in terms of its effectiveness,” Jeong said Monday. “Therefore, the court reached a conclusion that it was inappropriate to consider it as a factor to decide Lee’s sentence. Taking into account all circumstances, it is inevitable to hand down an actual prison term to Lee and detain him immediately.”

Throughout the retrial, the independent counsel has complained that the court was giving preferential treatment to Lee by ordering Samsung to establish the compliance system in order to reduce punishment.

The court said it did not consider the compliance system when it decided to send Lee back to prison. Since Lee already spent nearly a year in detention during his initial trial from 2017 till 2018, Lee has one year and six months left to complete his term.

“Although the new compliance system of Samsung has some shortcomings when it is evaluated now, I hope it will be remembered in the future as an important milestone in Korea’s corporate history as a starting point of law-abiding and ethical management,” Jeong said.

Some experts said the court made the decision to jail Lee because of negative public opinion. “The court has the power to suspend a prison term of less than three years, but it didn’t,” said Lee Chang-hyun, a professor of law at Hankuk University of Foreign Studies and a former prosecutor. “I wonder why it has not done so.

“Samsung was coerced by Park to pay the money, and it seems that he did not gain much in return,” Lee said. “It seems that Vice Chairman Lee [Jae-yong] is more of a victim.”

A former head of a district prosecutors’ office also questioned the court’s decision. “It ordered the establishment of an internal compliance system, and Samsung did so. Now, the court said the system was not effective. I wonder why it reached that conclusion,” he said.

“The court appeared to have made a compromise,” Lee continued. “While it was following the opinion of the majority that Lee must be jailed, it also took into account critics' opinions and lowered the prison term. If the court thinks Lee truly committed a heinous crime, he should have been imprisoned for five or six years, not two years and six months."

Other experts agreed with the court.

Kim Hwa-jin, a law professor at Seoul National University, said Samsung should have established the internal compliance committee inside the board of directors to make its actions legally binding. “Because the compliance committee was created outside the board of directors without legal grounds, it seemed like a mere formality,” Kim said. “Other companies must learn a lesson from this case.”

Despite the court’s decision that the compliance committee of Samsung was not satisfactory, the oversight panel is scheduled to proceed with its planned activities. It is scheduled to hold a regular meeting on Thursday and another meeting with CEOs of seven affiliates next week.

The compliance committee is expected to continue on. When he issued a public apology last May, Lee said the committee will perform its duty independently after his trial.