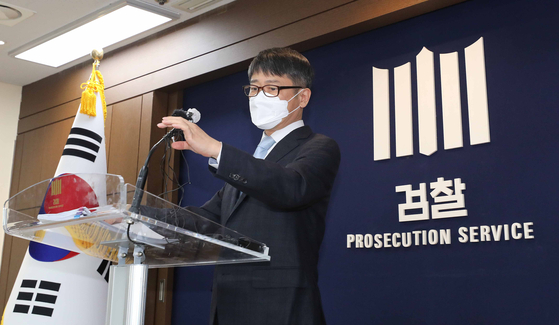 Im Gwan-hyeok, chief of a prosecutorial team investigating the government responses to the 2014 sinking of the Sewol Ferry, announces the results of the probe on Tuesday at the Supreme Prosecutors' Office in southern Seoul. [YONHAP]


State prosecutors on Tuesday wrapped up a yearlong investigation into the Sewol Ferry disaster in 2014, shooting down most allegations of a government cover-up.

The conclusions brought an anticlimactic end to a heavily scrutinized prosecutorial probe launched in November 2019 to examine a series of allegations about the botched government response to the major accident.

The Sewol ferry sank on April 16, 2014, in turbulent waters off the coast of South Jeolla, killing 299 people — most of them high school students on a field trip — and leaving five others missing.

The Coast Guard’s failed rescue operation and the tepid response from the Park administration gave rise to serious allegations of mismanagement and dereliction of duty, which prompted seven different government investigations into the accident.

What’s more, the Park government was accused of keeping tabs on victims’ families in response to many of them joining with activists and then-opposition politicians to press the Blue House for answers about the deaths of their loved ones.

Accusations were raised that the Blue House and other government agencies attempted to obstruct an independent investigative panel’s 2015 probe into the accident’s aftermath.

On this latter count, the prosecutorial team last May indicted nine of Park’s former presidential aides, including former Chief of Staff Lee Byung-kee, for abusing power by meddling in the 2015 probe.

Prosecutors said Park and her chief of staff at the time of the accident, Kim Ki-choon, received a special report from a military investigative unit about the activities of victims’ families, but said this alone could not prove the Blue House ordered illegal surveillance.

The report received by the ex-president showed no evidence of “practical rights violations” such as stalking, wiretapping or hacking into family members’ online profiles.

Then-Justice Minister Hwang Kyo-ahn and Senior Presidential Secretary for Civil Affairs Woo Byung-woo were also cleared of accusations of meddling for their attempts to stop a negligence charge against a top Coast Guard official.

As to allegations of incompetence leveled at the Coast Guard, the prosecution team filed charges against 11 former high-ranking officials of the agency, including its former head Kim Seok-kyun, in February for negligence.

Prosecutors, however, did not find the Coast Guard officers responsible for the death of one of the accident’s victims, identified only by his surname Lim, who was recovered by a helicopter from the site still breathing but died while being transferred to a treatment center.

There was also no evidence to prove the allegation that the Sewol’s tracking information had been tampered with, Im said. Further investigations of whether surveillance footage of the accident had been meddled with will be deferred to a subsequent special prosecutorial investigation, the prosecutor added.

The prosecutorial team interviewed a total of 201 suspects and witnesses a total of 269 times, and raided 17 different government agencies for evidence throughout its one year and two-month investigation, Im said.

Its lackluster conclusions are unlikely to satisfy many victims’ family members who were hoping for clearer results under the Moon Jae-in administration, which promised a wholesale reinvestigation of the incident.

While Tuesday’s results may mean the government’s negligence over the accident cannot be punished, the ex-president herself has paid a price for her conduct during the time of the accident, which become a major piece of evidence proving her unfitness for office during parliamentary hearings for her impeachment in 2016.

Park, who was removed from office and jailed for a major corruption scandal, was sentenced by the Supreme Court to 22 years in prison last week.

Sewol memorial unfinished due to disputes and resistance