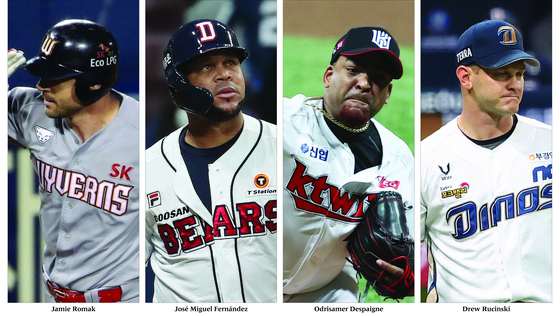 All but one of the KBO’s foreign player spots for the 2021 season have now been filled, and players have started arriving in Korea ahead of the start of spring training.

Twenty-nine of the KBO’s thirty foreign player spots have been filled, with the Kiwoom Heroes the only club yet to complete their quota. The Heroes have not signed a position player after parting ways with Addison Russell at the end of the 2020 season.

Under KBO rules, each club is allowed to sign a maximum three players and at least one has to be a position player. The KBO also implements a $1 million salary cap for players that are new to the league, but clubs are free to offer higher salaries in later years.

The Heroes struggled with their foreign position player last season, failing to fill the big gap left by Jerry Sands, who moved to the Japanese league after posting a 0.305 batting average with 28 home runs and 113 RBIs throughout 139 games in 2019.

The Heroes signed former big leaguer Taylor Motter to take Sands' place, but he was released in May with a batting average of 0.114 and four hits in 10 games.

It wasn’t until late June that the Heroes replaced Motter with Addison Russell, a controversial signing considering the former major league All-star had previously been suspended by the MLB for breaking domestic violence policies. Russell played until the end of the season, finishing with a 0.254 batting average, two home runs and 22 hits in 65 games, before being released at the end of the year.

Now the clock is ticking for the Heroes, who are also trying to fill some gaps in their management, with less than two weeks left before spring training begins, meaning signing a new player, flying them to Korea and putting them through the mandatory 14-day quarantine will eat into training time.

Every other club in the KBO has already filled all three foreign player spots.

The 2020 champion NC Dinos have re-signed star pitcher Drew Rucinski for a third season and brought back outfielder Aaron Altherr for a sophomore year.

The Dinos released pitcher Mike Wright at end of 2020 as he struggled in the second half of the season, signing former Colorado Rockies pitcher Wes Parsons.

Like the Bears, the SK Wyverns had to sign two new pitchers, but did keep star slugger Jamie Romak, who returns to the KBO for a fifth season. To complete their roster, the Wyverns, who finished a surprise second-to-last in 2020, brought in Venezuelan former big leaguer Wilmer Font and Artie Lewicki from the Arizona Diamondbacks.

After the best season in the club’s short history, the KT Wiz were able to hold onto all but one of their foreign players, bringing back pitchers Odrisamer Despaigne and William Cuevas. The Wiz also added outfielder Zoilo Almonte, a former New York Yankee who has spent that last two seasons playing in Japan’s Nippon Professional Baseball league.

Like the Wiz, the LG Twins were also able to re-sign two of their three players, bringing back pitcher Casey Kelly for a third season and infielder Roberto Ramos. The Twins also signed former San Francisco Giants pitcher Andrew Suarez.

After just missing out on the Wildcard spot in 2020, the Kia Tigers re-signed pitcher Aaron Brooks and outfielder Preston Tucker, adding Daniel Mengden from the Oakland Athletics to complete the lineup.

The Samsung Lions also opted for continuity, bringing back pitchers David Buchanan and Ben Lively. The Lions signed Jose Pirela, a utility player who has played in the MLB — where he has faced Toronto Blue Jays’ ace Ryu Hyun-jin — the Japanese league and the Taiwanese league over the last three years.

Finally, the Hanwha Eagles, who continued their decades-long slump in 2020, only re-signed pitcher Nick Kingham. The Eagles added pitcher Ryan Carpenter from Taiwanese side Rakuten Monkeys and former AL Rookie of the Month infielder Ryon Healy.

A total of 16 of 30 foreign players stayed in the KBO this year, one more than last year.

With spring training set to start on Feb. 1, KBO clubs are rushing to fly players into Korea in time to complete their mandatory two-week quarantine before training begins. All 10 teams are holding their training camps in Korea this year.