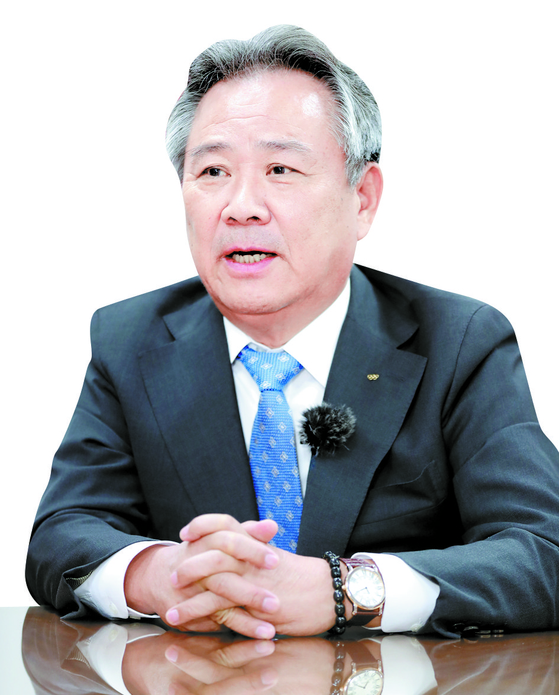 
In a vote held on Monday, Lee beat out three candidates for the new four-year term in an election for the top position at the Korean Sport & Olympic Committee (KSOC).

Of 1,974 votes cast by representatives of the KSOC, its member federations, provincial, municipal and other regional sports associations, Lee garnered 915 votes. Kang Shin-wook, a university professor and former head of the Korean Alliance for Health, Physical Education, Recreation and Dance, finished second with 507 votes.

According to KSOC, 2,170 voters were eligible, and nearly 91 percent participated in the election — up from about 64 percent in the previous election.

Lee Jong-kul, a five-term legislator and former head of the Korea Basketball Association, was third with 423 votes, and Yoo Joon-sang, a four-term lawmaker and current president of the Korea Sailing Federation, had 129 votes to rank last.

Lee Kee-heung, a veteran sports administrator who once led the national swimming federation, won his first KSOC election in October 2016. Then in June 2019, Lee was voted as a new IOC member, becoming only the second Korean member of the top international Olympic body alongside Olympic table tennis gold medalist Ryu Seung-min.

If Lee had come up short in the KSOC election Monday, he would also have lost his IOC membership, which is tied to his function as the national Olympic chief.

The election campaign was marred by mudslinging, with a series of accusations, subsequent denials and criminal complaints lodged with police.

The three candidates other than the winner had attempted but ultimately failed to form a unified, "anti-Lee Kee-heung" bid. They ended up splitting votes among themselves, allowing Lee to cruise to the victory.

Lee had been suspended as KSOC president during the campaign, and will immediately resume his duties on Tuesday.

Lee faced his share of criticism during his first term, especially as the country dealt with two high-profile abuse cases in sports on his watch. The first one from early 2018 involved a former national short-track speed skating coach Cho Jae-beom, who has been convicted for physically assaulting Olympic champion Shim Suk-hee. The other case, which surfaced last summer, centered on a former triathlete Choi Suk-hyeon, who took her own life after enduring years of physical and verbal abuse from her coach and teammates.

During his campaign, Lee said KSOC will do a better job strengthening character for instructors and athletes alike.

With his IOC seat intact, Lee is expected to play a key role for Korea's bid to co-host the 2032 Summer Olympics with North Korea. Lee will also oversee the country's hosting of the 2024 Winter Youth Olympics in Gangwon.

Lee, 56, has served in executive roles for multiple sports organizations, both domestic and international, since the turn of the century.

Lee was Korea's chef de mission at the 2010 Guangzhou Asian Games and the 2012 London Olympics. He also served as vice president on the organizing committees for both the 2014 Incheon Asian Games and 2018 PyeongChang Winter Olympics, two recent multisport competitions hosted by Korea.