Kim Seong-wook, director general of the international finance bureau at the Ministry of Economy and Finance, left, speaks during a briefing held Tuesday on measures to maintain foreign currency liquidity at Government Complex Sejong. [YONHAP]

Brokerage and insurer dollar deposits are being monitored with extra vigilance as the multi-trillion-dollar economic stimulus packages planned by the Joe Biden administration threaten to flood foreign exchange markets.

The Ministry of Economy and Finance, Financial Services Commission and the Bank of Korea said in a release Wednesday that they will tighten the monitoring of non-bank financial institutions to keep foreign currency liquidity at a sound level.

"During two weeks from March 5 until March 19, when Korea announced a bilateral currency swap deal with the United States, the instability of the local foreign exchange market was at the highest level since the 2008 financial crisis," said Kim Seong-wook, director general of the international finance bureau at the Ministry of Economy and Finance.

Kim added that while local banks have demonstrated sound foreign currency management, as they built capacity after the 1997 foreign exchange crisis and the 2008 global financial crisis, non-banks were the weak link during the first wave of the coronavirus pandemic in March last year.

"Last year, foreign exchange assets and liabilities of non-bank financial institutions soared, and we need to act pre-emptively before the global foreign currency market becomes volatile affected by the Biden administration," said Joo Hyun-joon, a director of the international finance division at the Finance Ministry. 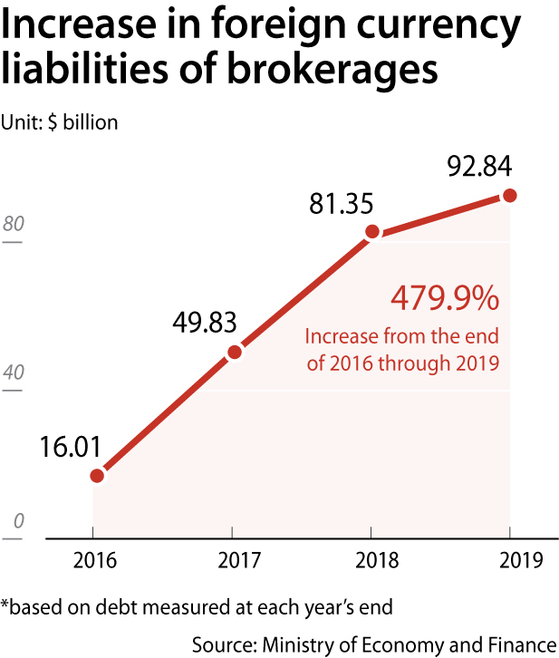 Financial authorities will run crisis simulations for non-banks to see if they can maintain soundness in terms of foreign currency liquidity even at crisis. Those stress tests previously only targeted banks. The ministry and related institutions also came up with three new indices to better monitor foreign exchange management by securities companies and insurers.

The indices will track: the amount of required and procurable foreign currency funds by non-bank institutions; the ratio between foreign exchange assets and liabilities; and the maturity of foreign currency deposits.

The financial authorities said the monitoring will be conducted monthly starting with large financial companies.

Even before inauguration, President Biden had been proposing super stimulus packages to invigorate the U.S. economy, which led to a continued softening of the dollar.

If the U.S. Federal Reserve raises interest rates in the future on economic recovery causing massive dollar outflow from Korea, there could be risks in the local foreign exchange market.

"We are not facing problems right now, but we came up with new measures by reviewing the situation in March, to be better prepared for risks," Kim said.