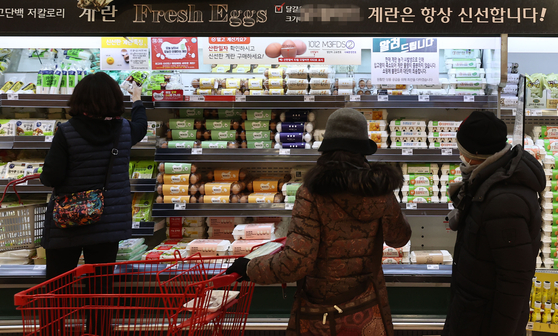 Customers shop for eggs at a discount mart in Seoul on Wednesday. [YONHAP]


With egg prices soaring, supermarkets are rationing purchases as panic grips consumers and the government intervenes.

Some are even settling for quail eggs.

The reason is an outbreak of bird flu.

Tariffs will be waived on 50,000 tons of imported eggs through June to stabilize prices ahead of the Lunar New Year holidays. The duty normally ranges from 8 to 30 percent.

While some consumers try to find alternatives, others are hoarding.

“I bought a carton of eggs at 6,900 won last week, but the price yesterday said it is 7,000 won,” said Park Soon-ja, a homemaker in her 60s living in Songpa District, southern Seoul. “I bought another carton of eggs before they become more expensive. Eggs are the most convenient ingredient to make side dishes, and I’m concerned about the price hike.”

Online egg shopping has become a bit of a competition.

She chose to buy quail eggs.

Emart, Homeplus and Lotte Mart are limiting the number of eggs a person can buy online and offline to prevent panic buying. At Emart and Homeplus, a person can only buy a single flat of eggs, while at Lotte Mart, they can buy up to three cartons.

This is the first time a limit has been imposed on egg purchases since December 2016 due to influenza.

The supermarkets did lower the price of eggs, cabbage and radishes starting last week in a joint effort with Ministry of Agriculture, Food and Rural Affairs to stabilize grocery prices.

“If it remains difficult to balance the supply and demand of eggs, buying limits could extend to after Jan. 28,” said a spokesperson for Lotte Mart.

Now “isn’t as grave as it was four years ago. Egg prices tends to rise ahead of national holidays due to increased demand. The price usually falls after the holidays,” said one egg industry source.