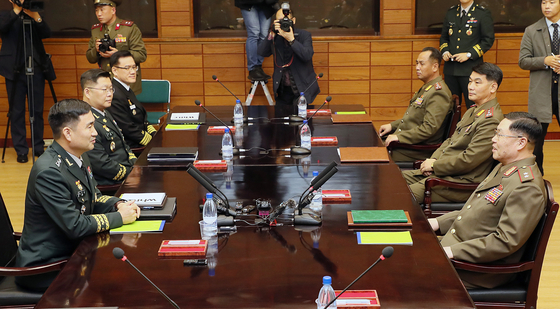 
South Korea’s Defense Ministry on Tuesday said it was ready to hold military talks with North Korea on “any matter” for the sake of reducing tensions on the peninsula.

In a briefing, ministry spokesman Boo Seung-chan said a military agreement signed with Pyongyang in September 2018 stipulated subjects like major military exercises be discussed between the two Koreas through a joint military committee.

The statement appeared to be connected to South Korean President Moon Jae-in’s remarks at a press conference Monday, in which he said Seoul’s upcoming joint exercises with the United States in March could be discussed through the committee.

The implication was that should Pyongyang agree to reopen diplomacy, Seoul could ramp down or postpone the drills to support denuclearization talks.

This proposal from Moon was widely interpreted as a response to North Korean leader Kim Jong-un’s speech at a ruling Workers’ Party congress in Pyongyang earlier this month. Scoffing at South Korea’s offers to conduct exchange on “inessential” issues like humanitarian aid, Kim lambasted the South for strengthening its military and holding joint military drills with the United States.

The revival of inter-Korean talks “entirely depends on the attitude of the South Korean authorities,” the dictator added.

Moon responded in his New Year's press conference, saying he recognized the drills were a “sensitive” issue for Pyongyang, but insisted they were defensive in nature. He also made clear his administration would attempt early dialogue with the incoming Biden administration in an effort to keep diplomatic options open.

The inter-Korean military committee brought up by the president dates to one of the earliest formal agreements struck between the two Koreas in 1991.

But the committee never actually materialized, remaining a concept only on paper for the last three decades. Seoul and Pyongyang agreed to formally install the committee by signing a military deal at the September 2018 summit and a subsequent top-level military meeting in October, but efforts were again undone by the failure of denuclearization talks the following year.

Last June, Pyongyang cut off all official communications with Seoul and unilaterally demolished an inter-Korean liaison office in Kaesong.

The rapid deterioration in relations prompted critics in South Korea to note the Moon administration’s military agreement with the North had been rendered useless, given that Pyongyang had violated its key tenets by conducting hostile actions toward the South.

Defense Ministry spokesman Boo denied such claims, saying the military situation on the border was being “actively controlled” by both sides. Concluding that the agreement was defunct was “a distortion of reality based on biased perspectives,” he added.

But even if Pyongyang does accept Seoul’s offer to discuss South Korea-U.S. drills through a joint committee, the legality of such a move independent of Washington’s consent would be questionable.

North Korea has shown little interest in discussing such issues with South Korea, preferring instead to deal directly with the United States in bilateral talks.