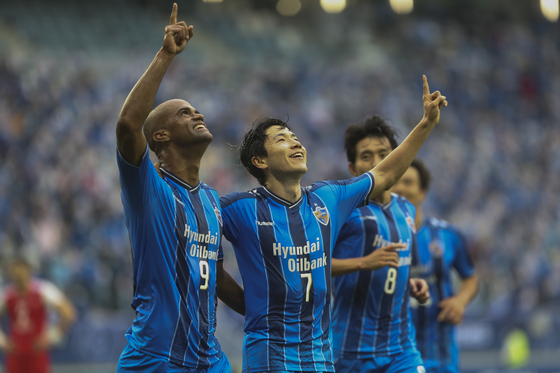 
After winning the AFC Champions League last month, Ulsan Hyundai FC will now go on to compete for the ultimate prize in men's club football — the FIFA Club World Cup.

As the winner of the AFC Champions League, Ulsan were drawn against Mexican side Tigres UANL during the FIFA Club World Cup draw in Zurich, Switzerland, on Tuesday.

Ulsan face tough competition from Tigres, the official club of the Autonomous University of Nuevo León, as the majority of the team are also members of the Mexican international squad, which ranks ninth in the world. Captain Guido Pizarro and goalkeeper Nahuel Guzmán are both Argentinian internationals, often appearing for the world's No. 7 side.

The Ulsan vs. Tigres match is technically round two of the tournament, which was supposed to start with a game between OFC Champions League winners Auckland FC and Qatari side Al-Duhail. Auckland FC withdrew from the tournament due to Covid-19 quarantine concerns, so Al-Duhail progress straight to round two, where they take on CAF Champions League winners Al Ahly SC from Egypt.

The winners of the UEFA Champions League and Copa Libertadores enter the tournament at the semi-final stage due to the relative competitiveness of those two competitions, so either Ulsan or Tigres will go on to face the winner of the 2020 Copa Libertadores, to be determined in the South American continental cup's final on Jan. 30.

Al-Duhail or Al Ahly will face UEFA Champions League winners Bayern Munich of Germany in the semifinal. The final and a third-place playoff will then be played on Feb. 11.

No Korean side has ever reached the final of the Club World Cup. The Pohang Steelers came closest, finishing third in 2009, while Seongnam Ilhwa Chunma, now Seongnam FC, finished fourth in 2010. The UEFA Champions League winner has gone on to take the Club World Cup trophy for the last seven years.

Ulsan's only other shot at the Club World Cup was in 2012, when they were knocked out in their first game by Mexican side C.F. Monterrey. Ulsan went on to lose the fifth-place playoff to Japanese side Sanfrecce Hiroshima, competing on behalf of the host nation that year, to finish the tournament in sixth place.