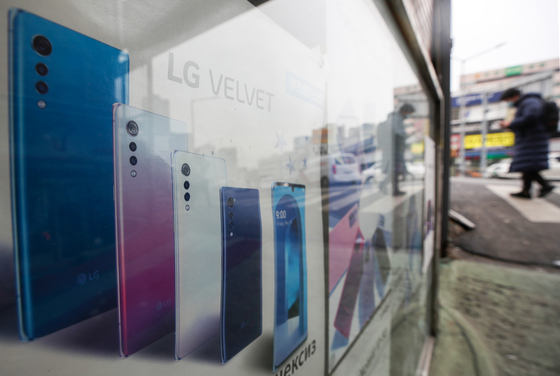 An advertising poster for LG Velvet smartphones is displayed at a retail shop in Yongsan District, central Seoul, on Thursday. [YONHAP]


Market insiders are mapping out different scenarios for how LG Electronics could restructure its struggling smartphone business after the company admitted Wednesday that it did need to rethink the loss-making division.

Analyst suggestions fall into three broad categories: Shut down, sell or downsize. Regardless of which direction the company chooses, the consensus is that any option will significantly improve the tech manufacturer’s financial records and corporate valuation, prompting analysts to raise the target price of the company.

An immediate closure is not likely since the move will cause short-term losses and might violate the terms and conditions of existing contracts.

“Considering contracts with telecommunication companies and external manufacturing service providers, it would be hard to sell off the mobile business in the short term,” said Lee Jong-wook, an analyst at Samsung Securities.

But under the surface, LG Electronics appears to already be working at cutting down the division. It has reduced in-house design and development teams for cellular phones and increased outsourcing recently, according to multiple media reports.

“LG will likely minimize resources for the division and rearrange personnel to move smartphone business employees to other businesses. The downsizing is also a good strategy for future sales of the division,” Lee added. 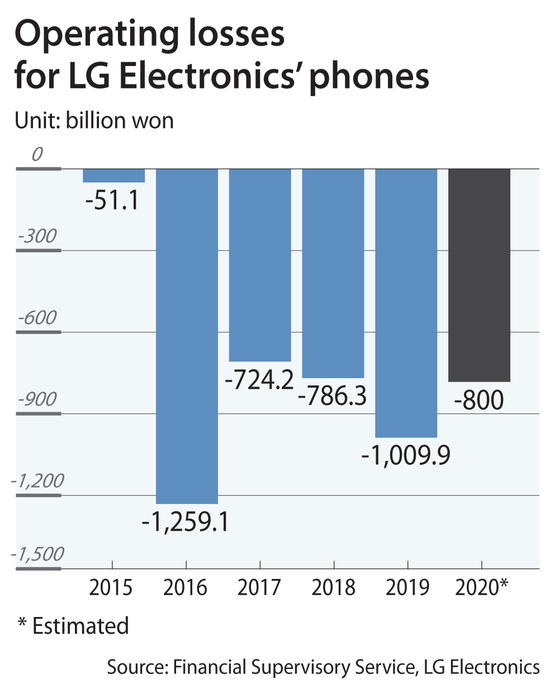 The electronics maker declined to comment on its plans, restating Wednesday’s stance that all possibilities are still open.


As LG is already highly dependent on outsourcing, at around 70 percent of phones produced last year according to market tracker Counterpoint Research, some expects think it could further expand the ratio to have all of its mid-range phones manufactured by external original design manufacturers (ODMs) while stopping production of premium models.

That strategy, however, has a drawback.

“[LG] needs to be more cautious about reorienting its focus toward budget models, because it could hurt the premium brand image that [LG] carved out in television and other home appliances,” said Kim Ji-san, an analyst at Kiwoom Securities.

Remaining on the table is sale of the division, a possibility that many analysts call the most desired result for LG.

“The best scenario is selling off the business,” Kim said.

But that won't be easy. Although it generated operating losses for 23 consecutive quarters, the division’s annual sales stood at around 4 trillion won with around 3,000 employees, meaning that if LG tries to sell the business, it's likely to come with a prohibitively high price tag.

But that doesn't mean the rumor mill hasn't already identified a potential buyer.

The Google rumor isn't new — it was also said to be interested in buying the unit back in 2015.

At the time, reports mentioned Google’s smartphone ambitions and LG’s strong list of intellectual property related to smartphones as the basis for a possible merger, although it turned out not true.

Other media outlets say that Vingroup is in talks with LG to buy its U.S. smartphone business, although LG declined to comment.

LG accounts for 13 percent of the smartphone market in the United States as of the third quarter, last year. Globally its share is around 2 percent, according to Counterpoint.

LG Electronics stocks have been on a tear since the statement Wednesday. Shares soared 10.78 percent to 185,000 won on Thursday.