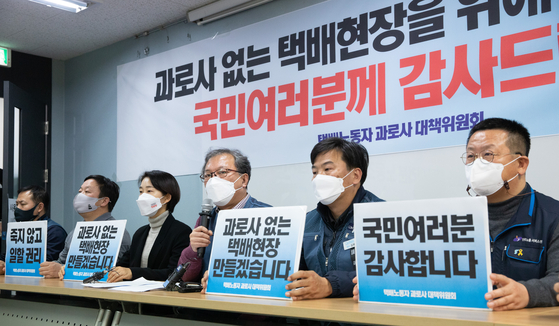 Members of a committee designed to prevent deaths of delivery workers speak at a press event held in central Seoul on Thursday. [NEWS1]


Working conditions for deliverymen are set to improve, and a strike has been avoided, after an agreement was reached Thursday by a broad group of stakeholders which included the workers and the logistics companies.


Labor representatives and civil society groups claim that deliverymen have died from overwork, though they have yet to provide evidence that the death rate for this group is higher than death rates reported for comparable groups.

The agreement arrived a couple of weeks ahead of the Lunar New Year holiday, when the demand for package delivery is expected to rise.

As more people shopped online during the pandemic, the overwork of deliverymen has become a much talked-about issue. A total of 16 delivery workers died in 2020, according to the Committee to Prevent Deaths of Delivery Workers from Overwork, which was formed to address the issue.

No comparable number was given, and on average Koreans of working age may die at a higher rate than the figure given by the committee. But the deaths raised enough concern that interested parties took action.

To prevent the deaths, delivery workers, logistics companies and the government established an organization last month to tackle the issue.

They signed the first agreement at the National Assembly Thursday morning.

The agreement says that deliverymen should not work more than 60 hours per week or deliver parcels after 9 p.m.

"We are deeply impressed by the agreement, but at the same time, it is deplorable why it has been made so late," the committee said in a press release following the agreement on Thursday.

“The most meaningful achievement made from the agreement is that it has clarified that logistics companies are responsible for sorting packages instead of shifting that responsibility to delivery workers,” said Lee Jo-eun, a spokesperson for the committee.

Logistics firms and contractors that hire deliverymen will have to pay them more if they are made to sort packages.

“Also, now that delivering after 9 p.m. is limited, deliverymen will no longer face penalty for not delivering packages,” Lee added.

To prevent overwork ahead of Lunar New Year holidays next month, logistics firms and their contractors will monitor the number of packages delivered from Jan. 25 through Feb. 20. Extra workers will be added to make sure workloads don’t rise dramatically during that period.

The concerned parties plan to produce a standard contract by the first half of this year, and a second agreement is scheduled to take place next month.

Raising commissions per delivery and allowing for a five-day workweek from the current six are some of the changes deliverymen hope to make through the upcoming agreement.

Following the Thursday agreement, delivery workers have withdrawn plans for a strike planned to start on Jan. 27.