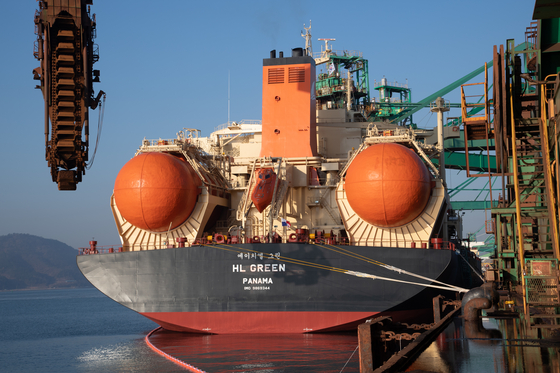 
Steelmaker Posco had 180,000 tons of iron ore shipped from Australia in a massive bunk carrier that runs on liquefied natural gas (LNG).

Measuring 292 meters (958 feet) in length, 45 meters in width and 24.8 meters in depth, Posco claims its HL Green bunk carrier is the largest existing LNG ship in the world.

“This is the first case in the world that an LNG-powered bunk carrier has operated on a route between countries,” the steelmaker said in a Thursday statement.

“HL Green” launched from Mokpo, South Jeolla, on its first journey last December to pick up iron ore from Australia. With the load, it returned to Gwangyang, South Jeolla, Wednesday, where Posco runs one of its largest production sites.

Using LNG in place of bunker oil can reduce emissions of sulfur oxide and nitrogen oxide by 99 and 85 percent each.

The adoption of an eco-friendly carrier is in line with strengthening regulations. From last year, the International Maritime Organization (IMO) — the United Nations agency responsible for regulating shipping — has obliged ships to use marine fuel with a sulfur content of no more than 0.5 percent, from the previous 3.5 percent.

That meant shippers have to either replace their carriers with LNG-powered ships or install additional equipment to reduce sulfur emissions.

Hyundai Samho Heavy Industries took charge of manufacturing the LNG-powered bulk carriers, while Posco also provided some of the materials needed for production that used to rely on imports.

The two LNG bulk carriers were completed in December last year. On Jan. 26, the other LNG carrier HL Eco will arrive in Korea with coal from Australia.

“We have 38 bulk carriers that ship material from overseas — as well as two replaced with LNG ships, we have installed desulfurizing equipment on 21 carriers,” Posco said. “For the remainder, we plan to make agreements with our shippers and shipbuilders to substitute them with an eco-friendly fleet in the future.”